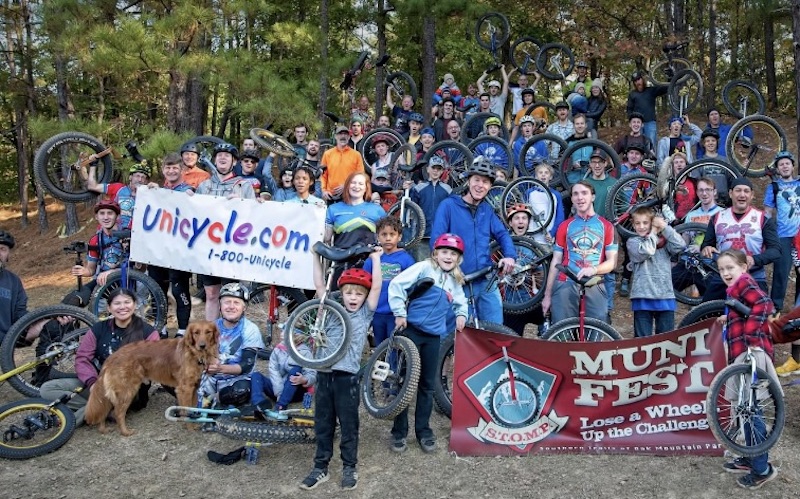 Muni Fest is a unicycling event for cyclists in the community to come together every year. (Contributed)

PELHAM – The unicycles were out and making the rounds this past week at Oak Mountain State Park as S.T.O.M.P. Muni Fest held its annual unicycling event.

S.T.O.M.P. Muni Fest is an event held every year at Oak Mountain State Park in order to give cyclists in the community an outlet to come together, ride trails on their unicycles and view custom made unicycles.

S.T.O.M.P Muni Fest was a success this year according to founder Wendell Rotenberry.

“It went very well,” Rotenberry said. “It went better than we could have ever expected really. Everybody had a great time. It was very well received.”

Over 70 people were present at the event from all over the country including states such as: Alaska, Tennessee, Florida, Washington and California.

“We had a lot of states represented,” Rotenberry said.

There was unicycle basketball event for those in attendance to play the sport while riding around on their unicycles.

“Everything was well received,” Rotenberry said. “It was an all-around good event. It was great.”

Rotenberry said live music was played around the campfire which was a fun and unexpected event.

“Some people came from Anchorage, Alaska,” he said. “They brought their instruments, and they played bluegrass music, so that was unexpected.”

The guest speaker was Chris Holmes who is a well-known unicyclist among the community.

Rotenberry discussed the changes that have happened on unicycles in the past few decades and how Holmes contributed to big changes made within the composition of unicycles.

“He is a great guy,” Rotenberry said. “He is a very early pioneer of mountain unicycling. Today, the industry standard of unicycles is the component that Chris Holmes helped to design and build so that unicycles don’t break. A lot of times, the crank would sheer off and bikes back then, the components were spread out across two wheels, but with unicycles all your weight is on one wheel, a lot of wheels would break because all your weight was on one wheel. But now thanks to Chris, it holds up. Chris is a huge hero.”

There were custom-made unicycles on display for those in attendance to view and explore.

“We have a lot of young people, a lot of kids and a lot of teenagers,” Rotenberry said.  “They particularly went crazy over them. Everyone, not just kids but also adults, their eyes would just light up. There are tons of things that people enjoy about it.”

A Penny Farthing was on display which is also known as a “high wheel.” This type of bike was popular in the 1870s.

“I would just like to thank Oak Mountain State Park and also the Birmingham Urban Mountain Peddlers,” Rotenberry said. “We had some good interactions with some of our local riders. We had a great time.”

More information on S.T.O.MP. Muni Fest can be found on the official Facebook page of S.T.O.M.P Muni Fest or on Stompmunifest.com.