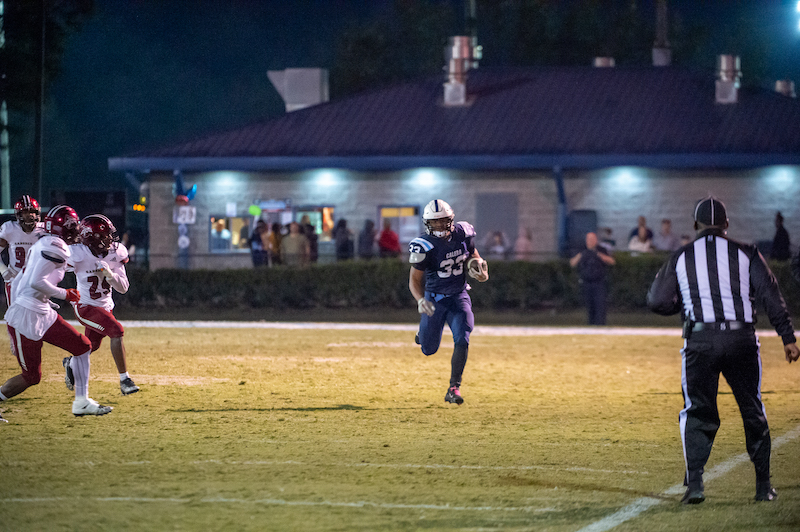 McCALLA – A blitz of a stretch from the McAdory Yellow Jackets in the first half was too much for the Calera Eagles to overcome in the regular-season finale on Thursday, Oct. 27 in a 30-9 loss.

What was a tight game through the first quarter ultimately saw the Yellow Jackets take advantage of an interception and fumble in the second quarter to create separation with a 30-3 halftime lead that Calera never could overcome.

McAdory, playing on its home field, scored the first touchdown of the game six minutes into the first quarter after a long fade pass set up first-and-goal. After the two teams traded penalties, the Jackets punched in a short touchdown to make it 7-0.

They then put together a quick defensive stand and earned good field position following the punt return.

Starting at the Calera 43-yard line, the Yellow Jackets weren’t able to get back in the end zone, but they did walk away with points thanks to a field goal that put them in front 10-0.

Then came an explosive stretch.

An interception on Calera’s next drive gave McAdory good field position once again. Despite facing second-and-19, the Yellow Jackets connected on a long wide open pass that extended their lead to 17-0 early in the second quarter.

Calera was able to respond for the first time when sophomore quarterback Antorious Johnson hit Braylyn Farrington for a long pass that put the Eagles inside the 15-yard line.

Eventually, they were forced to settle for a field goal, but TJ Hernandez capitalized with a 29-yarder that split the uprights to make it 17-3.

McAdory, however, had a response and then some.

The Yellow Jackets converted a third-and-15 on the ensuing drive, and eventually turned that into seven points with a short touchdown pass a couple plays later to make it 24-3.

Then, Johnson fumbled the ball trying to escape pressure on Calera’s next drive, which led to McAdory getting the ball right back at the Calera 18-yard line.

One play later, another fade pass ended with a touchdown that made it 30-3 going into the halftime break.

Out of the half, Calera looked much better defensively, as the second half came and went with far less action.

The Eagles eventually added their lone touchdown of the night when Amari Brundidge found a hole up the middle for an 8-yard touchdown run to create the final of 30-9.

Calera will now get set to square off with Hillcrest-Tuscalloosa on the road in the first round of the playoffs on Friday, Nov. 4.