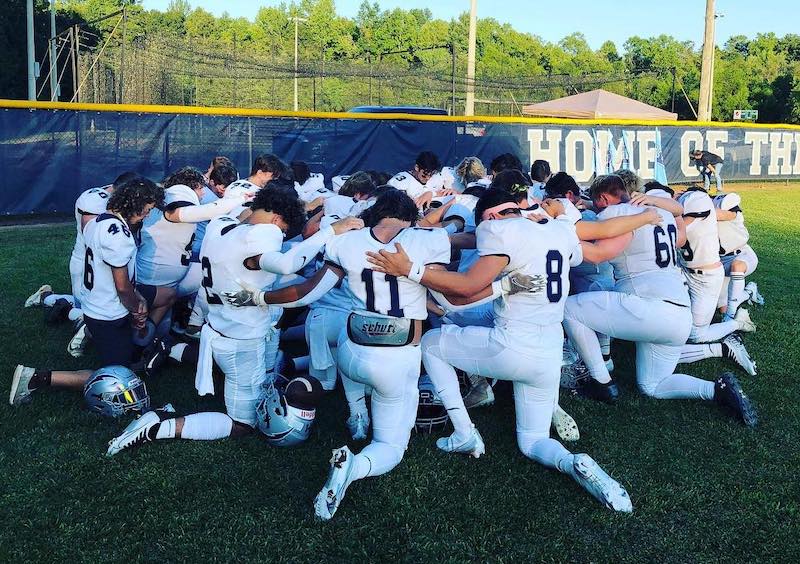 The Evangel Lightning remained undefeated on Friday night, Oct. 28 with a win against rival Ezekiel to advance to the state championship game. (Contributed)

ALABASTER – Evangel Christian School is one win away from claiming the 8-man football state championship trophy. With a 49-6 victory Friday over defending state champion Ezekiel Academy, ECS will now host Lighthouse Homeschool for the state title on Friday, Nov. 5 at 7 p.m.

“Ezekiel is our arch rival and beating them twice this year after they beat us twice last year, our guys really wanted a shot at them. It was a great win for us,” said Tim Smith, ECS head coach. “We have one more to get the state championship back in Alabaster, and that has been our goal all year, maybe more than the national championship.”

ECS (10-0) popped Ezekiel (5-6) early and often, taking a 21-0 lead through the first quarter. Eli Whitfield connected with Judah Thompson on a 16-yard touchdown pass to start the scoring, one of three TD passes in the game. Colton Dorough added a 2-yard touchdown run before Thompson scored again on a 48-yard pass from Whitfield.

Hunter Atkins helped make it 28-0 early in the second quarter, scoring on a 33-yard run, followed by a 33-yard TD pass from Whitfield to Kyle Jones.

Ezekiel’s only score came on a 39-yard touchdown run by Branden Davis late in the first half. It was 35-6 at intermission.

Atkins capped the night with a 67-yard touchdown run to finish with 123 yards on five carries. Whitfield threw for 164 yards and three touchdowns on 7-of-11 passing. Thompson was the biggest target with 87 yards on three receptions.

“The offensive line, led by Carson Donnovan at Center, Jackson Tuell, Ethan Stallings, really played well. They made it look easy at times,” Smith said. “Coach Hagan Joiner had a great plan on offense. Coach Clay Romano had a great plan on defense. Our whole coaching staff has done a great job preparing our kids. We weren’t surprised by anything. Every formation they came out in, we were ready.”

Cole Romano led the defense with seven tackles and a sack. Hayden Black had six stops and a sack. Clay Stanton also had six tackles, while Grady Watkins had five tackles and two sacks. The Lightning had three interceptions (Zane Barlow, Zion Thompson and Hayden Black) and two fumble recoveries by Stanton and Lucas Mast, who was also 6-of-6 on extra point kicks.