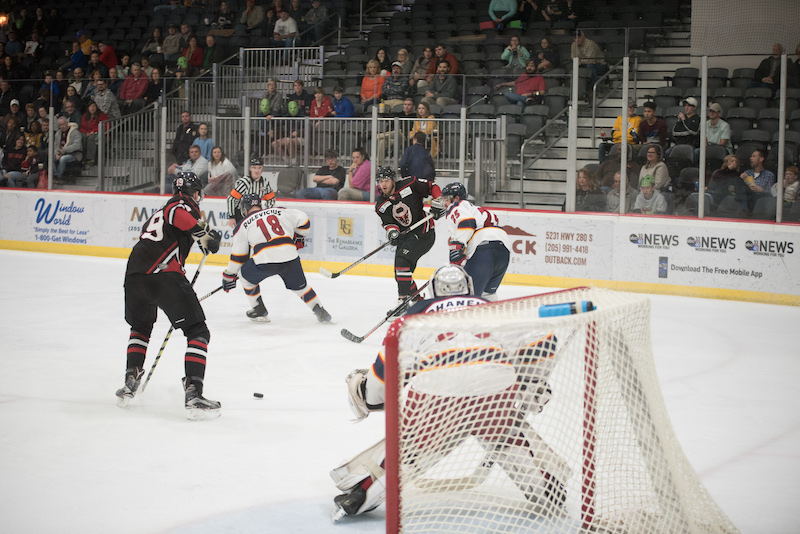 The Birmingham Bulls will be holding several events to bring fun to the community. (File)

PELHAM – The Birmingham Bulls officially started the 2022 season and have many events planned for fans.

Both Bowling for Turkeys and Dino Race are exciting events that have been set for Friday, Nov. 18 at the Pelham Civic Complex.

“Bowling for Turkeys has been a Bull’s tradition since 1992,” David Koonce vice president of communications for the Birmingham Bulls said. “Two fans are selected to take on the reigning turkey champion to bowl a frozen turkey down the ice to knock down pins. The winner receives a bath robe and the opportunity to defend their title next season.”

Though Bowling for Turkeys has been occurring for three decades, Dino Races is a new event that the Birmingham Bulls have introduced to fans.

“Dino Races is a new game we have been thinking about doing for a few years,” Koonce said. “Fans are encouraged to bring dinosaur costumes to the game and enter the big race during intermission.”

Koonce said events like these are great for fans and the community.

“Offering something that is really fun and family friendly is important to our organization,” Koonce said. “We enjoy being a part of the community in the Pelham area and are happy to provide a great environment that is affordable and you can bring the whole family to.”

Following the announcement that the Bulls will call Pelham home for the next five years, Koonce said he is excited for the upcoming hockey season.

“We are excited to be back in Pelham and playing pro hockey,” Koonce said. “We have a really good team this year and a great promotional night schedule. We have another game the next night on Saturday, Nov. 19 that is our first of two kid’s jersey giveaway nights. That is by far one of our most popular night. We will give away 1,000 of those (jerseys) at the Saturday Night game. Turkeys, Racing Dinosaurs, hockey and free jersey for the kids. What more could you want?”

More information about the Birmingham Bulls can be found at Bullshockey.net