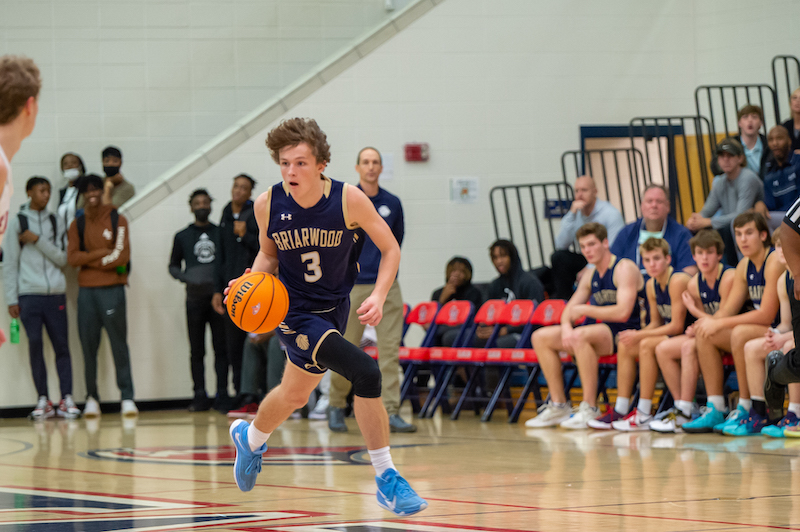 The Briarwood Lions are motivated heading into the 2022-2023 season with six returning seniors ready to leave their mark. (File)

NORTH SHELBY – It’s a new year for the Briarwood Lions’ boys basketball team and a strong group of seniors is ready to take the team on a memorable ride.

A season ago, the Lions were less experienced, but heading into the 2022-2023 season, they have six seniors ready to make a difference in addition to several other who are expected to step up.

“Having so many other guys, guys who have been through it, it’s just review this season,” head coach Bobby Kerley said. “We’re not having to focus as much on installing this year because these guys know most of it.”

Two of those seniors ready to lead this year are Miles Gilbert and William Lloyd. Both were named to the All-County Team last year as honorable mention players thanks to their balance in many facets.

Lloyd said this year’s group is extremely tight and that has them excited for the potential.

“We all played together last year and had two seniors who helped us, but now it’s our turn,” he said. “We’re a very high personality type group. Everyone is laughing, talking and having a good time in practice. Hopefully that is showing the young guys what to do.”

Gilbert added that with such a close group it adds a key component that can separate them from other teams.

“What makes us unique is we are very unselfish,” he said. “We know each other’s strengths and weaknesses. We all played varsity together last year and had a lack of experience coming into last year. We had to come in and figure it out. But coming into this year, we have that advantage for us.”

Mears is a strong shooter and big time hustler, Russell is impressive defensively and gritty, Lamey is a sharp shooter with a dead eye and Leib is a physical presence who will go after each loose ball.

“As a coach, it makes you proud to hear how they talk about this team,” Kerley said of his players. “Christ is preeminent. What does that look like on the court? Effort and character. You’re trying to win, but at what cost. How are you going about that victory?”

In addition to that, they also will have more size in the post with junior Luke Schultz and freshman Garrett Witherington both holding frames of 6-foot-4, 230 pounds or bigger.

“It’s one of the most encouraging teams I’ve ever been a part of,” Kerley said. “Everybody is loud. Everything is positive encouragement. A lot of older guys and a bunch of younger guys with six assistant coaches constantly talking. It’s loud and a joyful place to be. We love practice. Coming there, it’s a safe place to be because everyone is pulling for one another. Having seniors like we do, we have guys that I can ask to coach their position during drills.”

With the experience and size, they are focused on making sure there is 100 percent defensive effort, which they also hopes lead to offensive success, but due to the size, ball handlers and shooters, they are excited about the potential of the offense.

Regardless of what makes the difference, they’re focused on high effort and high character play.

“Our identity should be that we are a high character team,” Gilbert said. “We want teams to notice that. Our goal is to win, obviously, but we find more enjoyment in having fun and working hard. We’re in it to win it and our effort will show that.”

They’ll also compete in a new area this season with Helena and Pelham, which Kerley said will be an exciting challenge.

“We’re excited about the new area because of the challenges it brings,” he said. “Pelham and Helena are both good teams who will bring challenges. We know every game will be down to the wire. It will be tough till the final buzzer, but we’re excited for the opportunity to be great. We’ll be ready.”