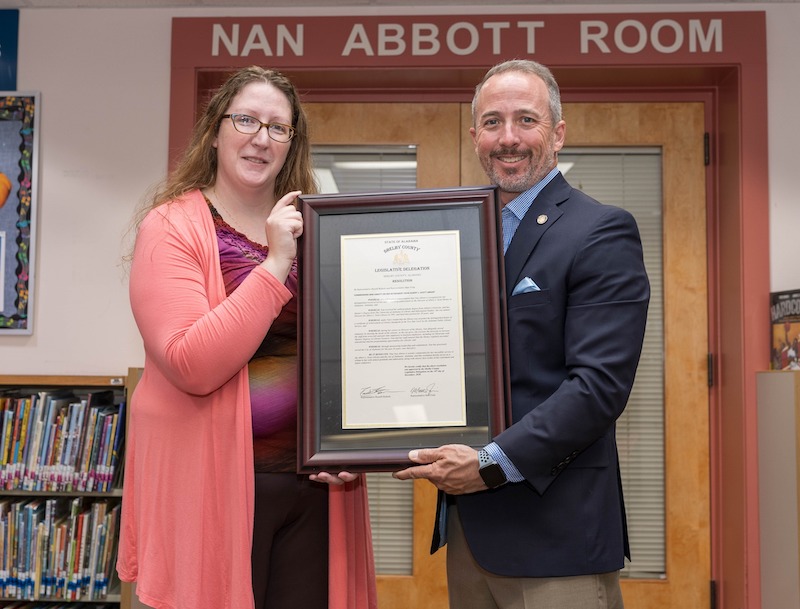 The Albert L. Scott Library recently received a $1,300 donation from Rep. Russell Bedsole, which will be used for children’s programming. (Contributed)

Alabaster – The Albert L. Scott Library recently received a $1,300 donation from Rep. Russell Bedsole, which will be used for children’s programming.

Bedsole presented a proclamation from the Shelby County Legislative Delegation honoring the late Nan Abbott’s contribution to the Albert L. Scott Library, and to the entire Alabaster community.

“All of our local legislators including April Weaver, Kenneth Paschal and Russell Bedsole, have been very generous with their recognition of the library this fall,” said Head Librarian Kim Roberts.

“They have acknowledged the importance of early literacy and education in their communities and we strive to honor that by using all of their contributions to help sustain our existing children’s programs and boost new initiatives. Not only supporting programs such as 1,000 Books Before Kindergarten and story times that incorporate early literacy and stem concepts, but also, supplying more study areas for students.”

While the money is referred to as a “grant,” it is actually tax funds that have been awarded back to the Alabaster community because Bedsole chose to recognize the Alabaster library, as well as other libraries within his district.

Roberts said the money will be used specifically to purchase story time props and supplies.

“We just hired our new library assistant that the Alabaster City Council approved, which will help us move almost all of our story times in-house versus contracting them out,” Roberts said. “The addition of this position and this contribution will allow the library to expand the amount of children’s programs offered.”

Beginning in January 2023, the library’s Toddler Tales will split into two programs which will be Teeny Tiny Time and Smally Fry Friday Story Time, and the library will be adding STEM Saturday and a PJ story time.