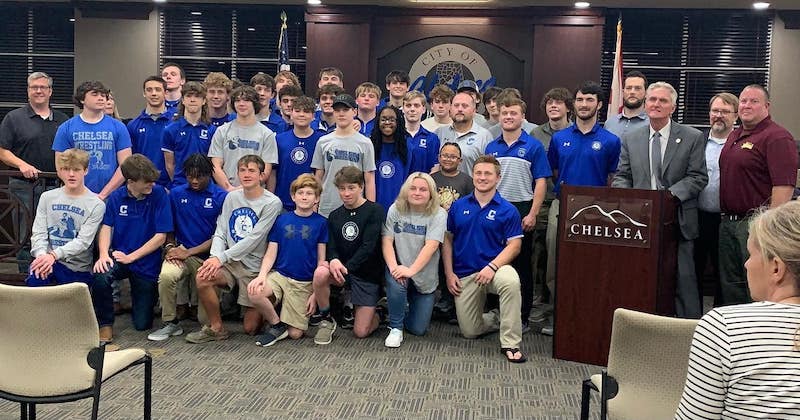 The Chelsea City Council heard from the coach of the Chelsea wrestling during a regularly scheduled meeting on Tuesday, Nov. 1. (Contributed)

CHELSEA – The Chelsea City Council heard from the coach of the Chelsea wrestling team and approved multiple Nick Grant applications for Chelsea schools during a regularly scheduled meeting on Tuesday, Nov. 1.

“Thank you for having us here this evening,” Chelsea wrestling coach Heath Butler said. “This group is a very special group. Most of our 5-6 year wrestlers have been with us since seventh, eighth grade, and we run our programs combined. So, we’ve had these kids for a long time.”

The team will compete in 8A region against teams like Thompson, Vestavia Hills, Hewitt-Trussville and Oak Mountain, Butler said.

“Our coaching staff is working hard, and we’re looking forward to it,” Butler said. “So, we invite y’all to come out. Blue White Night is Tuesday, Nov. 8, we’ll start at 6 p.m., and we’d love to have many people there.”

“These are a group of special approved Nick Grants that were not in the original approvals,” Mayor Tony Picklesimer said. “I’ve been delivering some Nick Grant checks this week. So, these (that) are approved tonight in this group are over and above what we have already approved. So, I’m very grateful to the Council for doing that.”

The next Chelsea City Council meeting will be held on Tuesday, Nov. 15.