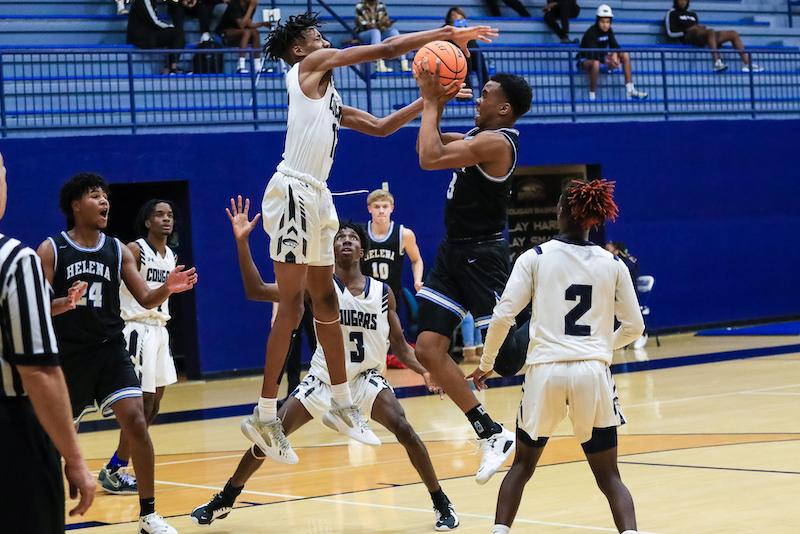 Helena travels to Oak Mountain for their first game of the season in November. (File)

HELENA — The Helena Huskies are about to enter a new season with a new head coach. For the past serval months, the Huskies have been preparing for their long-awaited return to the court, which is now just days away.

“We kind of tried to start this summer really,” first-year Helena head coach Lucas McDonald said. “It’s about just kind of getting in and setting a base for our culture. It’s really been about us doing all the culture-building types of things, showing up every day, working hard every day, and being consistent every day. All those little things make a huge difference in terms of results and that’s what we’ve been really focused on and trying to work on.”

A new season always comes with new challenges, Jacob Satterfield expressed how the preseason initiated the bond between the team.

“We didn’t know what to expect,” Satterfield said about Helena’s preseason. “It ended up going pretty well over the summer. We did pretty well, and we’ve learned the plays really quickly. We just got along well.”

Working with a new coach comes with a lot of uncertainties. Owen Davis has played for the Huskies for a while, and after working with McDonald and the Helena coaching staff in the preseason, Davis is looking forward to this season.

“This is my first time ever having a new coach,” Davis said about working with Helena’s new coach. “I didn’t really know what it was gonna be like, but coach came in and did well leading us and gave us new things to learn. I think it was a success.”

Building a bond between McDonald and his team was a crucial part of the team’s preseason over the summer, but the Huskies also managed to get down to the basics to work towards a successful season.

“My philosophy is a little bit different in terms of what we do schematically,” McDonald said. “It was a big adjustment during the summertime, but we had some success.

“These guys are excited about moving forward and what we’re doing every day.  There’s a lot to learn and a lot of things that we’re trying to figure out right now, and we are working together as a group to figure out.”

In addition to Davis and Satterfield, the Huskies will return two of the top scorers in the county with both Ian Johnigan and Josh Williams back on this year’s team.

Between those four players, McDonald’s schematics and several others ready to tackle important roles, the Huskies are excited for what’s ahead.