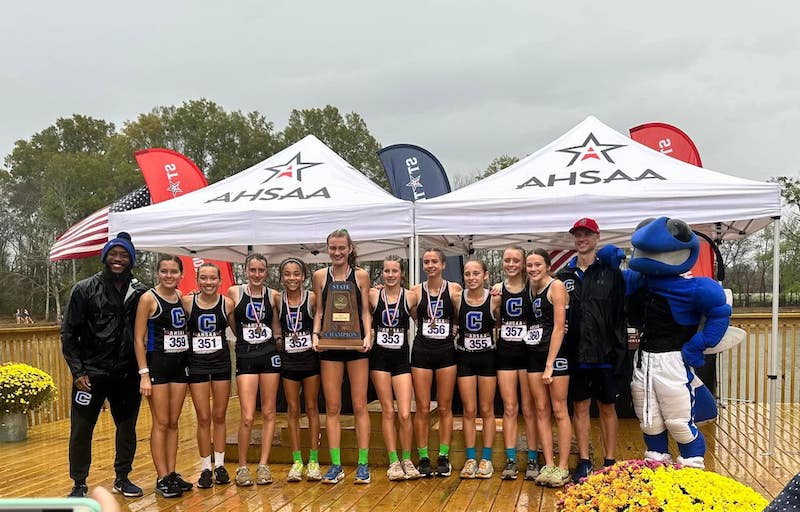 OAKVILLE – In their first season in Class 7A, the Chelsea girls cross country team wasted no time sending shockwaves across the classification when they upended the five-time defending state champions to claim their first cross country title in school history.

With those impressive number, and the first five counting toward the total score, Chelsea put together 35 points, which beat five-time defending champion Auburn by 25 points.

Ty Cason and Cady McPhail were two of the highlights in a strong and historic effort for the Hornets thanks to finishing inside the top five.

Not only was Cason the highest finisher for Chelsea, but she put together a career-best performance.

The freshman beat her previous personal record by 20 seconds and claimed her only podium finish of the season by taking home third in the event behind a time of 18:34.27.

That time also just edged out McPhail, who finished one spot lower in fourth to conclude her high school cross country career.

The senior, who is committed to Auburn, put together a speedy effort of 18:39.73. Entering the event off back-to-back wins in the Randolph Invitational and the section meet, she finished with her fifth fastest time of the season and finished her final year with five top-five finishes and three finishes of first, while she finished all seven events in the top 10.

The future, however, looks bright despite it being McPhail’s final year as two other young runners stepped up in a big way when it mattered most on Saturday.

Eighth grader Mia Dunavant finished just behind her two teammates in sixth at the event thanks to her fifth sub-19 event this season.

The young athlete ran the race in 18:45.50, just eight seconds off her personal record, while she concluded the season with her fifth top-10 finish in seven races.

Sophomore Juliette Edwards then added one other Chelsea finisher inside the top 10 of the state meet by finishing in ninth with a time of 19:01.05.

It marked her second-fastest time of the season, as she finished just less than two seconds off of her personal record of 18:59.43. Her finish of ninth was the fourth time this season she finished inside the top 10, while she did so in each of her final three races of the season.

The final score to count toward Chelsea’s win came from Tyndal Ann Griffith, and it was a big finish. With four Auburn finishers between her and the next Chelsea finisher, she used a personal record to help cement the championship by finishing 13th.

Lemmie Floyd was the other runner to finish inside the top 25 for Chelsea, and she added another young runner to perform well. An eighth grader, she finished 24th with a time of 19:48.51.

Oak Mountain’s girls were the next highest local team in the final standings, coming in at fifth.

Spain Park’s Delaney Vickers also performed well by finishing 35th in the race with a time of 20:06.64.