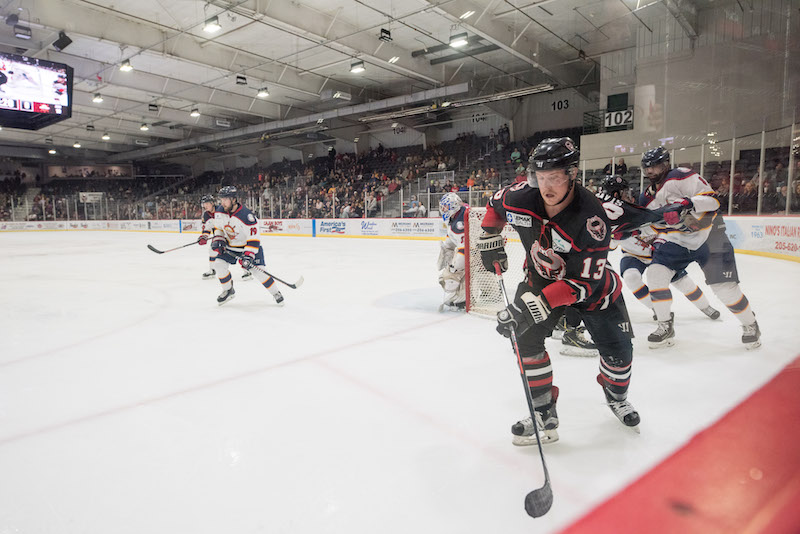 The Birmingham Bulls will host a variety of promotional nights in the upcoming months. (File)

PELHAM – A variety of activities are scheduled in the upcoming months for fans of the Birmingham Bulls.

A few of the promotional events include Military Night, Teddy Bear Toss and a food drive.

Military Night is scheduled for Friday, Nov. 11 at 7 p.m.

“All veterans, active and former military receive free admission to the game,” Birmingham Bulls Vice President of Communication David Koonce said. “We are also giving away camo can koozies to the first 1,000 adults courtesy of Precision Chiropractic. The team will be wearing special military jerseys that will be auctioned off immediately following the game.”

An ugly sweater and Birmingham Bull Teddy Bear Toss will be hosted on Friday, Dec. 2.

“The Teddy Bear Toss is a hockey tradition around the world,” Koonce said. “Fans bring a stuffed animal to the game and toss them on the ice after the Bulls first goal of the game. Those are collected and given to the Salvation Army.”

“We have partnered again with the Community Food Bank of Central Alabama for two nights of a food drive,” Koonce said. “Fans are encouraged to bring a canned food item and donate to the games. We will also be collecting donations all week at our front office.”

On Saturday, Dec. 17 a PEANUTS night will be hosted.

“The team will be wearing special Charlie Brown jerseys that will be auctioned off immediately following the game,” Koonce said.