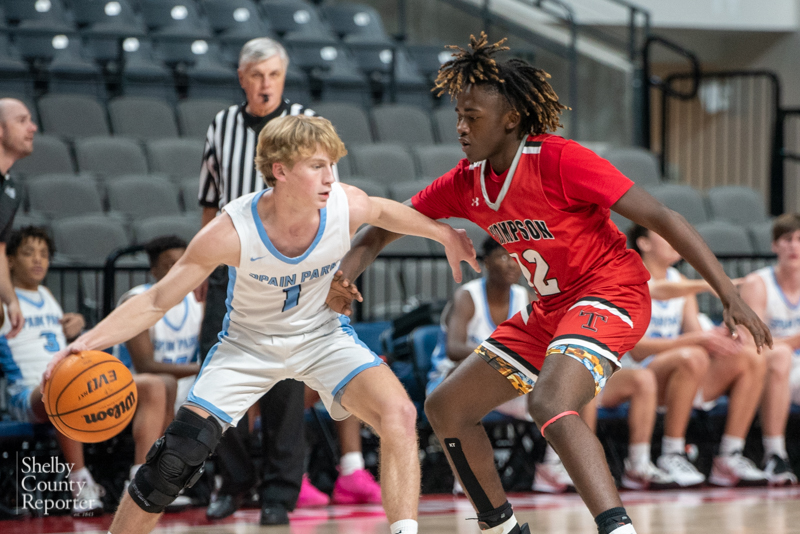 ALABASTER – A new era for Thompson boys basketball is beginning, but with a familiar face at the helm of the program. DJ Black, who spent the last few years as a key facet of Dru Powell’s staff, has taken the reins and brings a wealth of experience from the college ranks as a player and a coach.

Coach Black has coached at Penn State, Navy and at UAB on Robert Ehsan’s staff. He also met his wife while coaching here in Alabama so he figures to be a fixture around here for the long run.

“I’ve kind of worked my way down the East coast. Originally from Pittsburgh, Pennsylvania, played Division III basketball then I transferred and walked on at Penn State,” said Black. “Then my next job was as a Division II grad assistant, so it kind of laid the pathway for coaching at all three levels and I could recruit different types of kids.”

The Warriors’ program has great potential for the 2022-23 season and a talent level that Black is very comfortable with in his head coaching debut.

“We have a great core group of upperclassmen, especially our seniors, that have now been battle-tested and been through some big games,” says Black. “Last year, these guys were getting some experience, but they hadn’t had big game experience and came out on the plus side of some big games. Now, they have a year under their belt and you mix in a lot of young talent as well with the leadership which has really helped me as a new head coach.”

Black believes his squad can take a big step forward from last year. The Warriors roster has a high comfort level with the system and that familiarity coupled together with the talent could mean big things for the program’s ceiling for this season.

“Last year we had to play a certain way each game, we’ll see how the first few weeks go, but I believe we’re a lot more skilled offensively and can make shots,” says Black. “One thing I teach these guys it’s not about the play, it’s how you play. It’s been fun to watch in practice, it’s competitive every single day. All 15 guys on this roster have the potential to play at the next level, if they want to.”

Coach Black and his staff aren’t the only ones who have noticed Thompson’s on-court capability.

“We’ve had more college coaches in the gym this fall than we’ve had in a long time—at all levels,” says Black. “When you have a region that’s filled with players that are good, you’ll have college coaches on a nightly basis coming into Warrior Arena.”

Class 7A’s Area 5 loses Oak Mountain to reclassification, but added the Vestavia Hills Rebels in what figures to be a tall task for any team with their eyes on a postseason bid.

“Our region is a gauntlet, it’s very good in my opinion. We have us, Tuscaloosa County, Hoover and Vestavia Hills now in it,” said Black. “I’m not a big preseason rankings guy, but that’s

possibly four top teams in our region. I’m excited for it, iron sharpens iron, that’s our motto. We sharpen each other every day, well, so does the region. There’s no nights off.”

The eventual area champion will have to be a deep, adept club that continues to improve throughout the year and playing their best ball in January. Coach Black loves that he has strong leadership along with a group of young players that can make an impact as well. Upperclassmen are taking the young guys under their wing and the team has “flourished.”

“We have a very strong senior class, upperclassmen as well, but we also have some very good underclassmen so it’s a great mix of talent that these guys have owned. Age is just a number, it doesn’t matter how old you are at Thompson.”

Although Black has spent the majority of his coaching career in the college ranks, he sees Thompson as a place with collegiate-level facilities that will maximize his players’ potential. When his tenure ended at UAB, it didn’t take long for him to find a new home with an uncommon commitment to its student-athletes.

“One of my first calls was from Coach Powell and Dr. Vickers and they told me to come check out Thompson,” says Black. “I literally drove up to campus I was like ‘Where am I at, this is crazy, sign me up’ and it’s been a blessing ever since. The support that we have is unmatched. They invest in athletics and academics and people ask ‘When are you getting back into college’ and I say I’m still at college.”

At basketball media days the players mentioned the weight room specifically as a big difference in their offseason routine. The team will no doubt be stronger as a whole this year.

Thompson will be led by All-County selections Carson Pringle and José Gonzalez who played big parts in the team’s run to the Sweet 16 last year. Pringle, who committed to the University of Montevallo last week, is a guy Coach Black knows he can count on.

Gonzalez took a big step last year and his improvement during the season was undeniable as he grew his skill set and grew into his body. Like all of his teammates, the senior also participated in AAU basketball in the offseason, which added to the foundation he built at Thompson.

The team also boasts multi-year starter Tre Adolphus, talented transfer Xzayvion Childress and freshman Jay Green who started games last year as an eighth grader so the atmosphere at Warrior Arena should be exciting and feature some incredible matchups.

“We want this arena packed every single night starting November 8th with a good Northridge team coming into town. Should be a great atmosphere with some high-level basketball so we’re excited about the season getting started.”

This is a dangerous Thompson team that will challenge for the region title and beyond. DJ Black will now be tasked with putting the pieces together for a team with a ceiling as high as the arena they play in.