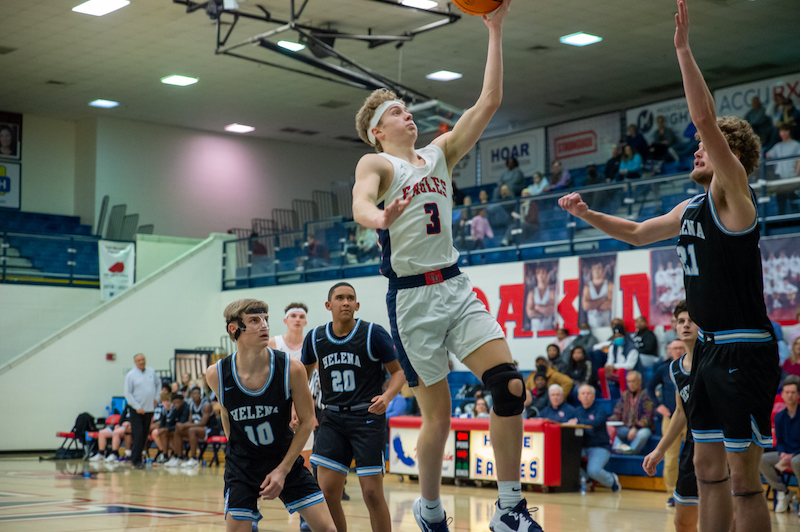 NORTH SHELBY – After facing some hardship in the first quarter of their season opener against the Murphy Panthers, the Oak Mountain Eagles were able to bounce back with a strong final three quarters to pick up a 74-58 victory on Saturday, Nov. 5.

The Eagles began entering the second quarter of the game trailing Murphy 13-11. However, Oak Mountain began to even the score with 4 minutes remaining of the first half.

By the end of the quarter, the Eagles had stormed in front for a 29-26 lead thanks to an impressive run.

Oak Mountain carried its second-quarter momentum into the third quarter. The Eagles’ defense continued to apply pressure to Murphy’s offense every chance they got.

With a minute left in the quarter, Oak Mountain From there, the Eagles added five more points from Matthew Heiberger to take a 52-37 lead into the final quarter.

Heiberger had a steal, a free throw and two layups to help create the separation.

With the momentum fully in their favor, the Eagles maintained their large lead throughout the fourth quarter to close out the 74-58 victory for their first win of the season.

Heiberger totaled 25 points for the Eagles and had 10 rebounds. Senior Tre Thomas added 20 points to the scoreboard for Oak Mountain and 10 blocks as both players finished with a double-double.

Oak Mountain’s next game is Tuesday, Nov. 8 against Chilton County.