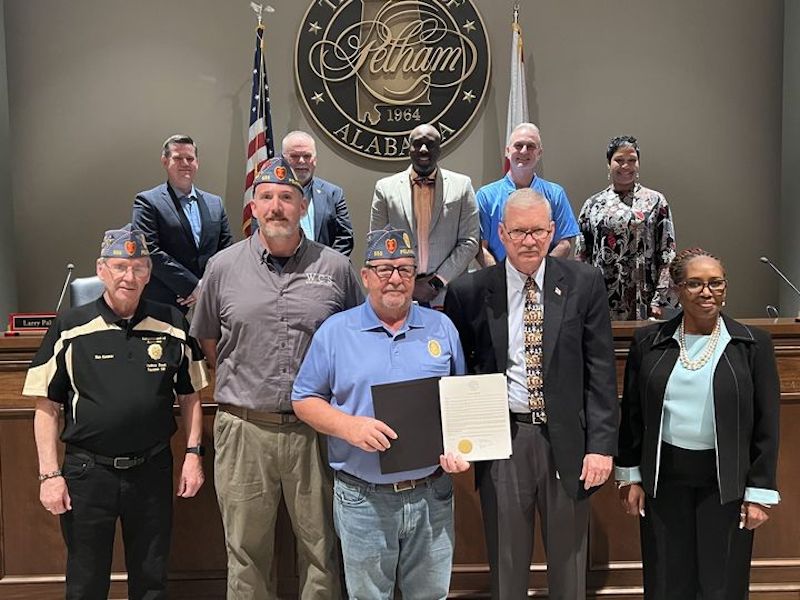 A Pelham city council meeting was held Monday, Nov. 7 in which veterans were honored for their service. (Contributed)

In the council meeting, Mayor Gary Waters took time to acknowledge veterans and present them with a proclamation. American Legion Post 555 was present during the meeting to receive the proclamation.

“The American Legion was chartered and incorporated by Congress in 1919 as a patriotic veterans organization devoted to mutual helpfulness,” Waters said. “The American Legion’s mission statement is to enhance the wellbeing of American veterans, their families, our military and our communities. The American legion is the nation’s largest wartime veteran service organization, advocating patriotism, honor, promoting national security and continues to devote itself to fellow service members.”

Those present applauded as the four servicemembers in attendance received recognition for their service.

The Sons of American Legion Matthew Blount Squadron 555 was recognized during the meeting and was chartered on Nov. 9, 2006, in close proximity to Veterans Day.

“I want to thank all our veterans,” Councilmember Mildred Lanier said. “Thank you for your service always.”