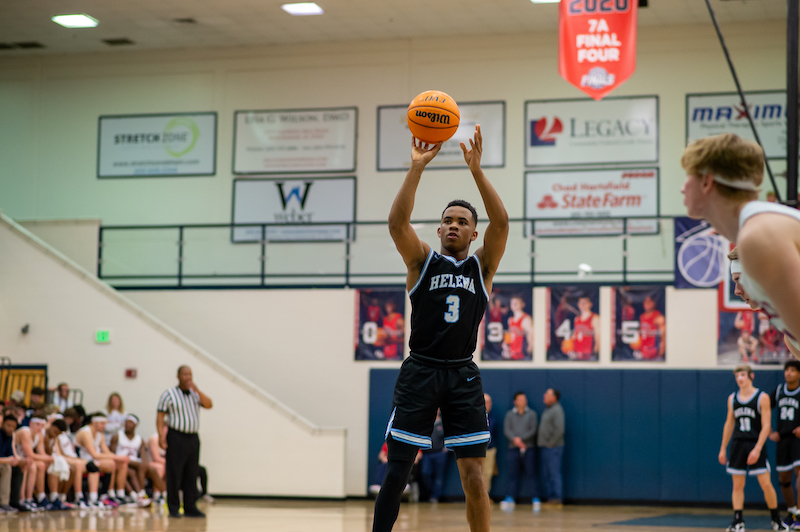 After a tight opening quarter between the two teams, Helena was able to create separation in the second period, eventually taking a near 30-point lead in the final quarter before holding on to finish off a 59-48 victory.

An exciting start to the game saw Helena jump up 3-0 before Calera responded quickly with a 6-0 run to take a 6-3 lead.

That advantage held up before Helena reclaimed the lead at 7-6 with less than two minutes to play in the period.

The run for the Huskies was part of a 6-0 run to end the quarter, giving them a 9-6 lead going to the second quarter.

Calera, however, quickly erased the deficit with a 3-pointer in the first minute of the second quarter to even the score.

The two teams both got close looks at the basket over the next two minutes, but a physical stretch came and went with no points.

With that, Helena gained momentum and eventually pulled away in the quarter after extending that 10-3 run to a 22-5 quarter that put the Huskies in front 31-14 at the half.

Calera came out and scored the first two points to open the second half of the game to cut the deficit to 31-18, but Helena responded in a big way to create even more separation.

The Huskies eventually used another run to make it 38-18 before a back-and-forth stretch began with the two teams scoring a combined 21 points over the final three minutes of the period.

Helena, however, never lost the upper hand and took a 49-28 lead into the final quarter.

The Huskies extended the lead to near 30 points in the final quarter, but the Eagles were able to claw all the way back to make it a 10-point game with 1:10 remaining.

But the deficit was too much to overcome as Helena closed out the 59-48 win.