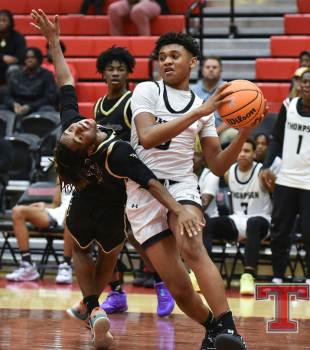 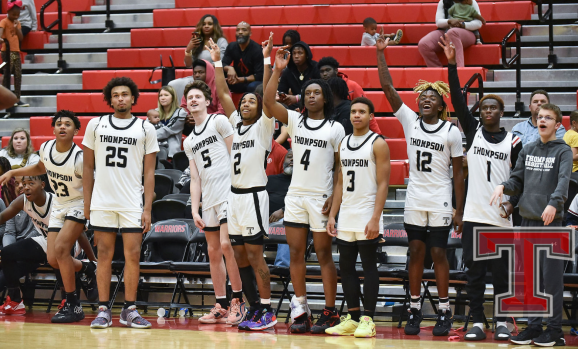 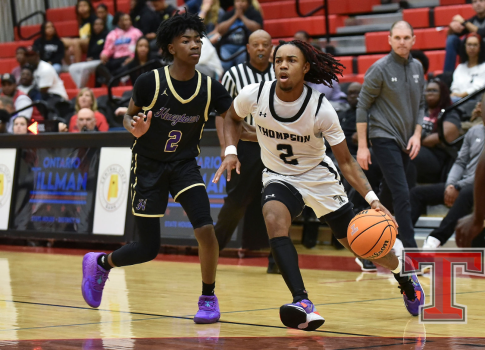 ALABASTER – For their second game of the season under new head coach DJ Black, the Thompson Warriors continue to strive in their new era with another win against their latest opponent Hueytown.

Managing to gain a lead early on in the first quarter of the Thursday night game, Thompson remained to carry the lead into each quarter and defeat the Hueytown Golden Gophers 73-46.

The Warriors obtained a 19-11 lead within the first quarter that the Golden Gophers struggled to overcome. Senior Jose Gonzalez totaled seven points from two two-pointers and one three-point shot. Following Gonzalez with five points was Xzayvion Childress with two two-pointers and a single free throw.

A combined seven points from a three-pointer from Tre Adolphus and two two-pointers from Jay Green and Colben Landrew kickstarted the momentum for Thompson’s Thursday night success.

Thompson carried their success into the second quarter of the game by totaling 17 points.  Gonzalez and Green totaled four points each for the Warriors. Masiah Robinson, Cam Prittchett and Childress had a two-pointer and Carson Pringle had the final three-pointer for the half.

The Warriors continued to wear down the Golden Gophers throughout the second half of the game. Hueytown was only able to get a combined 24 points in the third and fourth quarter.

Thompson had another combined 17 points in the third quarter. Childress and Pringle totaled four points each. Damien Wooley was two for two at the free throw line, while freshman Daeshaun Morrissette had one successful free throw. Landrew got a basket right outside the three-point line to add another three points to the score.

The Warriors solidified their second win of the season with seven points from Wooley and Travis Hatch. Landrew went four for four, and Morriesette went two for two at the free-throw line. Pritchett got one final free throw for the evening.

Thompson is now 2-0 for the season and will travel to Mountain Brook to take on the Spartans on Tuesday, Nov. 15.