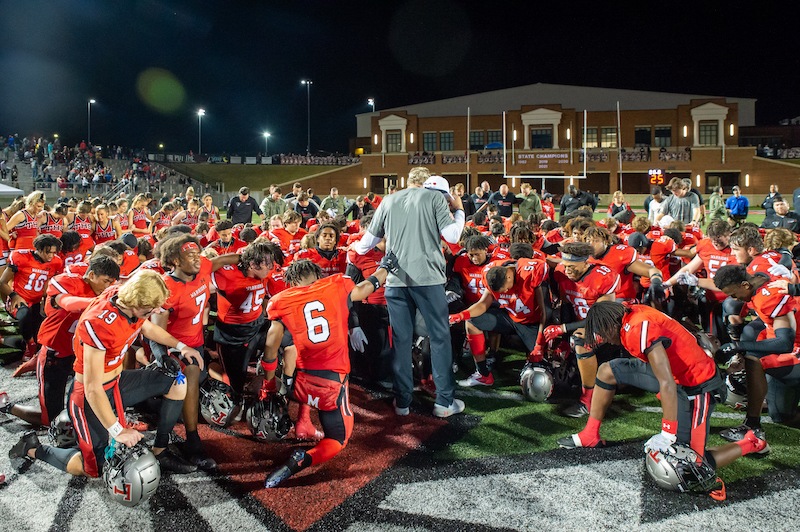 This Friday, the Thompson Warriors and Hoover Buccaneers will meet in the Class 7A semifinals looking for… wait, haven’t we already done this? Oh, it’s a new year?

That’s right, the two teams will square off this Friday for the sixth consecutive year looking for a spot in the Class 7A State Championship game.

Yet again, it’s a rematch, and for the second year in a row, Thompson will hit the road to the Hoover Met after losing 9-0 three weeks ago in a game that determined the region champion.

Motivation shouldn’t be a problem for either going into this one.

It’s easy to be nervous in a big game like this with so much on the line, but for Hoover, the Bucs have lost this semifinal matchup four years in a row. If you aren’t motivated to change that and get back on top of the state after Thompson has stolen the spotlight for the last four years, then you mine as well not suit up.

As for Thompson, they lost the region championship for the second year in a row to Hoover, and this time around, it came in the form of the Warriors’ first shutout since 2016 and on their home field.

There shouldn’t be a single player on either side that doesn’t have 100 percent focus all week and enter this game ready to make a statement.

The first game between the two a few weeks back was the definition of this season for the Warriors—a defense that has been dominant and an offense searching for consistency.

The question going into this game—has that changed?

In round one of the playoffs, Thompson put up 34 points in a shutout of Huntsville with eighth-grade quarterback Trent Seaborn throwing for 342 yards and four touchdowns.

This past week against Vestavia Hills, however, the Warriors were outgained 298-177.

A lot of that was because they didn’t possess the ball much in the first half, which takes us to the first key point going into this matchup.

Thompson has to convert on opportunities.

Look, we know what we’re going to get from both of these defenses.

They’re both truly giving up around 9.5 points per game on that side of the ball and it’s tough to see either having a bad game.

But Thompson looked like the better team in that first game offensively. The Warriors had four trips into Hoover territory, three in the red zone and two inside the 15-yard line and walked away with no points.

Last week, Thompson had no first downs in the first half and couldn’t convert third downs.

To win this week, the Warriors have to convert. That starts with positive first-down plays of 3-4 yards and avoiding penalties.

This isn’t the Thompson offense of the last few years that can score in 2-3 plays every drive. It’s a more methodical approach with two solid running backs and young quarterback play trying to gel with new faces at receiver.

Ultimately, I think Hoovers offense has improved slightly the last few weeks, so Thompson’s has to be prepared to match that.

With the way these two defenses play, whichever team can get to 21 points first should be able to feel good about winning this battle.

Going up against a team a second time in the same season, much less a few weeks, is a very difficult task. To beat a team twice that close together may be even more difficult.

With two defenses who have given up 17 or less in basically every game this season, this should be a slugfest down to the wire that comes down to which team can make the plays late offensively to win the football game.

For me, it could be as simple as Hoover has to prove it can beat Thompson in this situation for the first time in five years, but judging from this season, I need to see Thompson’s offense prove it can make the plays to win this one.

The talent is here, now, it’s time to step up and show what you’re capable of.