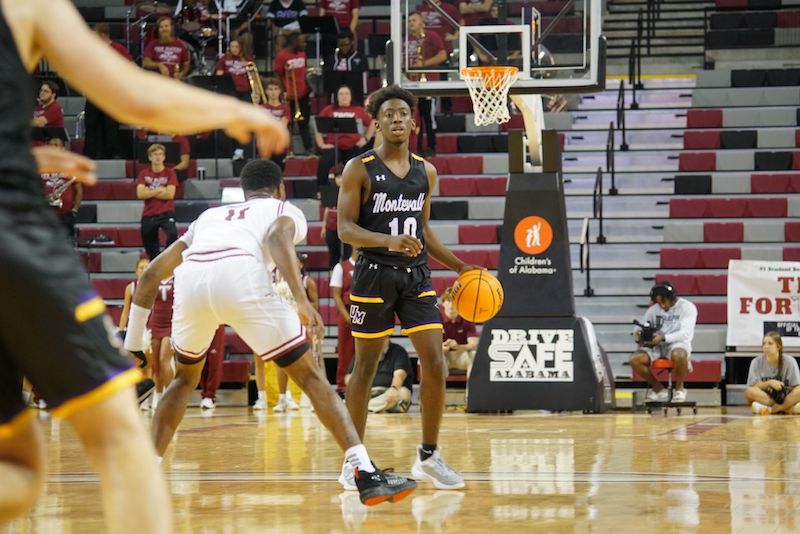 Former Pelham and Montevallo High School standout MJ Jones has been named the Gulf South Conference Freshman of the Week for a special first week of his collegiate career. (Contributed/UM Athletics)

MONTEVALLO – A former local basketball star is already making a quick impact at the collegiate level as a freshman.

MJ Jones, who graduated from Pelham last year, was recently honored by the Gulf South Conference for a stellar debut at the University of Montevallo during his first two games as a college basketball player.

Jones scored 26 points in his first regular season game with the Falcons, helping them storm back to pick up a 77-74 victory over the University of Tampa.

Jones scored nine of the final 15 points in the comeback victory, while his second assist of the game helped give the Falcons the lead late in the game. He shot 73 percent from the floor in the victory.

He followed that debut with a 15-point performance in the team’s second game against Saint Leo University. While the game resulted in a 93-84 loss, it was the second double-figure game for the freshman, who finished the week averaging 20.5 points, four rebounds, three assists and two steals per game, while also shooting 57.7 percent from the field and 40 percent from beyond the arc.

That special week not only has him as the third-leading scorer in the conference through the first week of the season, but he also was named the Gulf South Conference Freshman of the Week for his effort.

He also scored nine points in one preseason exhibition game against Troy.

At the high school level, Jones was a four-year starter, playing three years at Montevallo before moving to Pelham for his senior season.

He was named to the All-County First Team each of his final three years of high school, before becoming the county’s Player of the Year as a senior at Pelham.

He averaged at least 18 points per game from his sophomore season on to earn the accolades each of those seasons. During his senior season, he averaged 23.7 points, 3.9 rebounds and 3.8 assists per game.

In addition to his success this season, Jones has also teamed up with former Montevallo High School player Te Smith, who has started strong as well.

Smith scored in double figures in both of the team’s exhibition game, then scored seven in the season opener and 15 in the loss to Saint Leo.