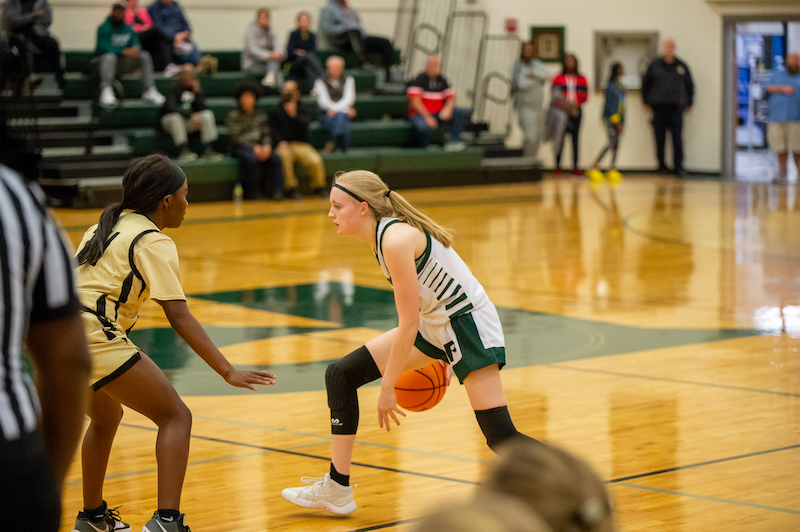 Pelham’s girls basketball team fell short in a 76-44 road loss to Vestavia Hills on Nov. 14 to open the season. (File)

VESTAVIA HILLS – In a battle of two teams who advanced to the Final Four in their respective classification last season, the Vestavia Hills Rebels and Pelham Panthers met on Monday, Nov. 14 at Vestavia Hills High School.

The Rebels, however, fell just short of the Class 7A title last season in a 73-64 loss to No. 1 Hoover last year, and showed that their hasn’t been much drop off in a 76-44 victory.

For Vestavia, it marked their fourth win in a row to start the season 4-0, while it was Pelham’s first game coming off a trip to last year’s Final Four where the Panthers saw a furious comeback attempt fall just short against Oxford.

Pelham also returns some of its premier talent from last year, including the county’s Player of the Year Laci Gogan, but the Rebels and their classification advantage were too much for the Panthers in their first game of the season.

In the early going, the Rebels were able to create some quick separation with a 15-5 run that helped them open up an 18-7 advantage.

Pelham, however, had some early fight.

Tee King drained a 3-pointer shortly after, which sparked a 9-0 run that also saw Karma Wynn sink one from beyond the arc to cut the deficit to 18-16.

Just as it looked like the Rebels were going to start another run, Gogan drained another 3-pointer to make it 21-19 early in the second quarter.

That was followed very quickly by another 3-pointer from King to cut the deficit to one point at 23-22.

From there, however, Pelham’s offense went silent. The Rebels were able to adjust the rest of the quarter, while their offense was just getting started.

Vestavia finished the quarter on a furious 21-3 run that put them in front 44-25 at the halftime break.

That ultimately set the tone for the rest of the game.

In the second half, Pelham struggled to regain its confidence on the offensive end.

The Rebels followed their strong end to the second quarter with 32 more points in the second half, outscoring the Panthers by 23 points to pull away for the 76-44 win.

Vestavia had three players finish in double figures with 20 points from Sarah Gordon, 16 points from Ryleigh Martin and 10 points from Grayson Hudgens.

King, a freshman, led Pelham with 15 points in the loss, and head coach Crosby Morrison was proud of her defensive effort. Gogan also matched King’s performance with 15 points, but the Panthers only got 14 points beyond those two scorers.