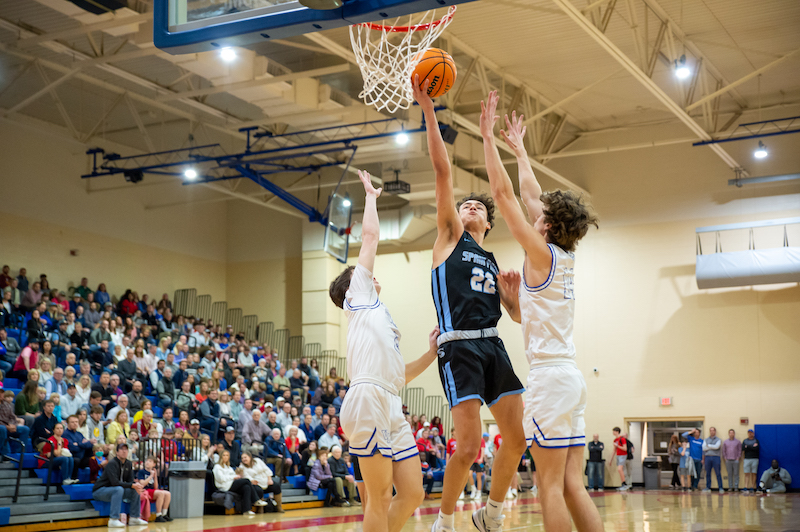 After taking down Austin in the opener, the Jags turned around three days later on Monday, Nov. 15 and picked up a second-consecutive thrilling road victory behind another 20-plus point game from Zach Gray.

This time around, in a thrilling back-and-forth battle with Vestavia Hills, Gray played hero. With his team trailing by one point, he drained a last-second shot to give the Jaguars a 55-54 victory and a 2-0 start to the season.

Gray finished with 22 points in the win, including a monster second half of 15 points, following up a stellar 23-point game in the opener.

Spain Park never led by more than two points at the end of any quarter, but the Jags were 12-18 from the free throw line in the game and finished strong defensively in the final quarter to hold off the Rebels in the victory.

The battle, however, was thrilling throughout, specifically with Gray and Vestavia’s Win Miller trading blows throughout the game.

Miller finished with 28 points to lead all scorers, but the Jags prevented another double-figure scorer from Vestavia in the win.

In the opening quarter, however, Spain Park was forced into the position of playing catchup early.

Miller totaled six points, while the Rebels posted 13 as a team and put together their best defensive effort of the night.

Spain Park got five points from Sam Wright and two from Gray in the period, but those were the only two scorers as part of a seven-point quarter that featured just two made shots.

The shooting woes for the Jags, however, didn’t last long.

In the second quarter, the offense warmed up and Vestavia didn’t have an answer.

The Jags got at least three points from five different players, while six total scored in the quarter to total 23 points. Korbin Long had six of those points on three field goals, while Gray added five behind a 3-4 mark at the free throw line and an additional basket.

The Jags also got four points from Evan Houser, three from Wright and two from Joshua Fonbah in the quarter.

Miller had a solid quarter for the Rebels with a 5-5 mark from the free throw line and seven total points, while they also got 3-pointers from two players, but Vestavia could only muster up 15 points, which allowed the Jags to erase the deficit and take a 30-28 lead into the half.

That led to a thrilling third quarter between the two, as they went shot-for-shot.

Vestavia came out and knocked down three 3-pointers in the third quarter in addition to five more points from Miller, while Gray made sure his team kept pace with his best quarter of the night thanks to nine points.

The Rebels outscored the Jags 14-13 in the period, but Spain Park was able to maintain a one-point lead going to the final quarter of play.

The fourth quarter was no less thrilling between the two as the back-and-forth battle continued.

Miller was determined to give his team the win, scoring 10 points in the period, and it looked like that might be enough.

Gray, however, not only scored six himself, including the game-winning shot, but he got help from his teammates. Jared Smith came through with a clutch and-1 in the period, while Wright added three points with one made free throw that became important as well.

In the end, that was enough for a 12-12 fourth quarter that allowed the Jags to pick up the one-point victory.

Beyond Gray’s 22 points, Wright finished in double figures with 13 for Spain Park, while Long and Smith added six and five, respectively.