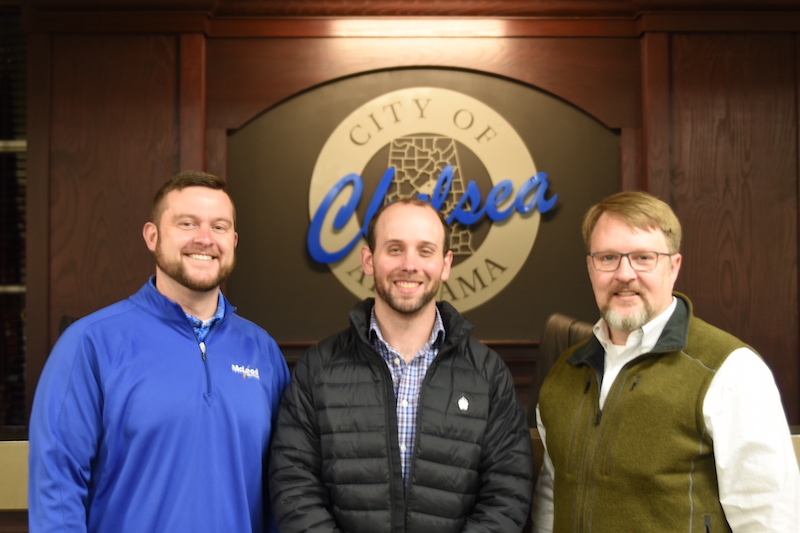 CHELSEA – The Chelsea City Council awarded funds to Chelsea High School, heard a report from the mayor and approved a proposal for a Chelsea Park Master Plan Project during a regularly scheduled City Council meeting on Tuesday, Nov. 15.

Chelsea Mayor Tony Picklesimer provided a report to the Council and audience.

“The groundwork is going on at the hotel,” Picklesimer said. “That has been a long time coming, and we are very excited to see that work begin. I want to say thank you to the Auburn Hospitality people for hanging in there and hanging through a very difficult time in our nation’s economy and staying true to that project. So, we appreciate very much what they’ve done.”

“I hope you are starting to see a little trend here,” he said. “Even though we are in what some would call an inflationary period, there is still construction and still new business coming to our city and that’s a very good thing. Our revenues for the city of Chelsea continue to be extremely strong and we are grateful to our citizens for that (and) we are grateful for our neighbors.”

The City Council also approved resolution 1043 to accept a proposal for a Chelsea Park Master Plan Project by Dix-Hite.

“This proposal is to do a park system plan for the city of Chelsea,” Councilmember Christopher Grace said. “This will involve public engagement, public comment and (I) just want our citizens to be aware of that. You’ll be receiving some notifications publicly about a couple of activities that we’ll be conducting here in the city to elicit your feedback and your desires about what our park system plan needs to include.”

In other news, the City Council:

– Approved resolution 1044 to declare property as surplus and to authorize its donation.

– Approved resolution 1045 to declare property as surplus and to authorize its disposal.

– Approved resolution 1046 to authorize insurance coverage of the City of Chelsea retirees.

– Approved the City of Chelsea Bills to be paid.

The next Chelsea Municipal Court will be held on Monday, Dec. 5 at city hall.

Those who wish to keep up to date with the City of Chelsea may follow its Facebook page at Facebook.com/ChelseaCityHall.