‘It was worth it:’ FOES teacher, SRO eat crickets to celebrate successful fundraiser 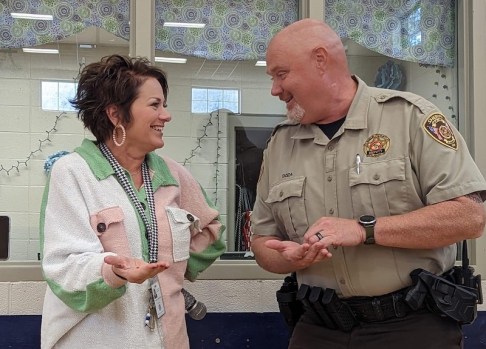 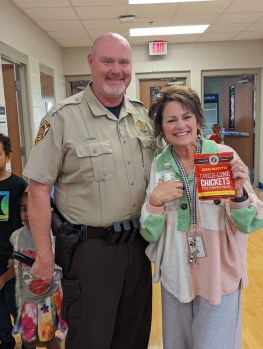 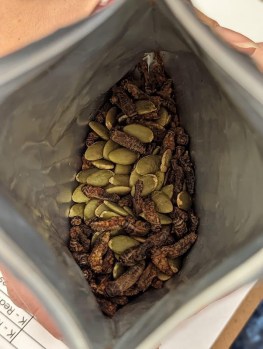 CHELSEA – It’s no secret that Shelby County is filled with school employees who go the extra mile for their students and each other.

It is a delicacy few people would willingly ingest, but P.E. teacher Amanda Hardenbergh and SRO Deputy Gary Goza agreed to do it if students reached their fundraising goals for the PTO’s Read-a-Thon fundraiser, called “Camp Read S’more” this year.

The students not only met the original goal of $20,000 in three days, but they more than doubled that number in just two weeks.

To give students another prize to work toward, the PTO asked if any staff members would be willing to eat crickets if $25,000 was raised.

Hardenbergh was the only one who said “yes.”

“When I realized the guys weren’t going to eat the crickets, I knew I had to do it,” Hardenbergh said. “I felt it was a crazy idea, but it was an awesome idea. Pumping the kids up for our school is 110 percent worth crazy ideas.”

“I said no again, but I told her I would eat a cricket if the school reaches $50,000,” Goza said. “So, when $50,000 was reached, I found out that I would be eating multiple crickets during P.E. classes throughout the day. I ate six crickets in all, and all of them were terrible. But I would do it again to help the school and these kids.”

Hardenbergh said she would do anything to help the school, too; plus, she wasn’t overly stressed about eating the crickets.

“I’ve eaten grasshoppers in Mexico, so I wasn’t really concerned,” she said. “Needless to say, it was truly yucky, and as the day went on, they were harder to eat each time.”

Watching Hardenbergh and Goza eat crickets was only part of the reward, though. The funds that students raised will go toward completing the second phase of the third-fifth grade playground, which will cost about $38,000.

“We also were able to give money to a few of our special teachers (reading coaches, special education teacher and speech teacher),” Worster said. “We will also do a sensory path out by the playground.”

In addition to Read-a-Thon, the PTO’s other big fundraisers include Gingerbread Lane, a holiday shop for students in December and Hornet Hustle, a fun run in the spring.

Nearly 550 students registered for this year’s Read-a-Thon, according to Worster.

“They also had a reading log so we could collect their reading minutes,” Worster said. “While we did want to raise money, we also wanted the students to fall in love with reading more and hit higher reading minutes.”

Students receive prizes for registering, achieving top reader status and for each level of giving they completed.

“We have always offered some type of reward to the students and the teachers. It might be a popsicle party for the school, or one year, they dressed the principal and assistant principal up like Elf on the Shelf. It all depends on who is willing to join in our wild ideas.”

This year, teachers were rewarded with Forest Oaks T-shirts from Crafting with Brandy if their classes reached 100 percent participation in logging in, Worster said.

In addition, teachers were awarded 1,500 copies, and the copy rooms were restocked with snacks.

The students got their campout movie night, and then, the PTO added an unexpected twist to the reward system.

“I was trying to think of something ‘camping theme’ and thought, ‘Why not eat crickets?’” Worster said. “Coach Hardenbergh jumped at the chance to help us out, and we told the students at $25,000 she would eat crickets. Officer Goza had told me only for $50,000 would he eat them.

“We hadn’t told the students, but it was more of a joke between Officer Goza and PTO. On Thursday, before our fundraiser ended, we needed almost $400 to reach our $50,000 goal. Officer Goza came into our meeting to let us know he told all the other SROs what was going on, and they rallied together to make him eat crickets.”

The students were fascinated as they watched.

“They all were chatting and cheering,” Worster said. “We also had our maintenance guy and one of our para teachers jump in on the cricket-eating fun for the students. We also had some students who wanted to try crickets, so at our campout, we let them if they asked their parents first.”

Some students asked Hardenbergh why she was willing to eat crickets.

“I told them that after all the hard work and time they put into reading, the least I could do was something gross,” Hardenbergh said. “They all laughed and loved it.”

Although Hardenbergh has eliminated herself from any future insect-eating pursuits in the reality TV show realm, she was glad to be a part of something positive for everyone at FOES.

“By the next morning, I decided there was no possible way I could ever be on Survivor and probably never be on The Amazing Race,” Hardenbergh said. “It was worth it for the kids and our awesome school.”