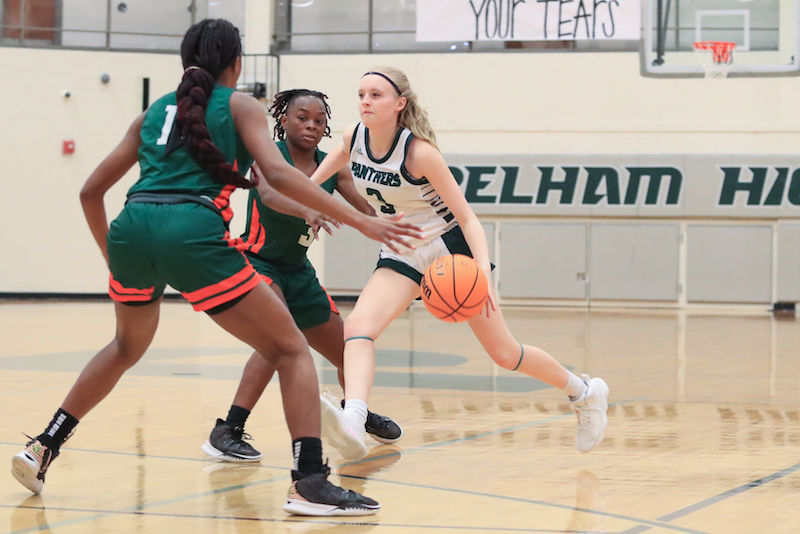 TUSCALOOSA – Over the river and through the woods, Pelham traveled to Tuscaloosa County for its first away game of the year and returned with a pre-Thanksgiving win.

Thanks to a strong night from Senior Laci Gogan and a dominant defensive performance, the Pelham women’s basketball team picked up their first win of the season on Thursday, Nov. 17.

The Panthers held the Tuscaloosa county Wildcats to four points in the first quarter of the game, while scoring 11 points to pick up a lead early on in the game.

Gogan was a major contributor on the offensive end, scoring 13 points of her game-high 26 points in the first half to help Pelham pull away with a strong halftime lead.

But, it wasn’t just Gogan who contributed to Pelham’s success in the first half. Four additional players totaled a combined 13 points.

Taylor Howard and Titania King knocked down a basket outside the arc. Averi Smith, Clare Robinson and Howard gained two points each before the half was called.

Pelham’s strong start set the tone for the night. While Tuscaloosa County was able to maneuver the Panthers’ defense more in the second and third quarter, they were unable to achieve a comeback Thursday night.

The Panthers got four more points from King in the third quarter and another four in the next.

Gogan went three for three at the free throw line in the third quarter, but it was her powerhouse of the fourth quarter that helped Gogan rank up the points for the Panthers in the end.

Gogan finished the final quarter with six free throws and a single basket outside the arc.

The Panthers were also 22-29 from the free throw line in the game.

Pelham’s returned home with a 54-42 win before their Thanksgiving tournament.