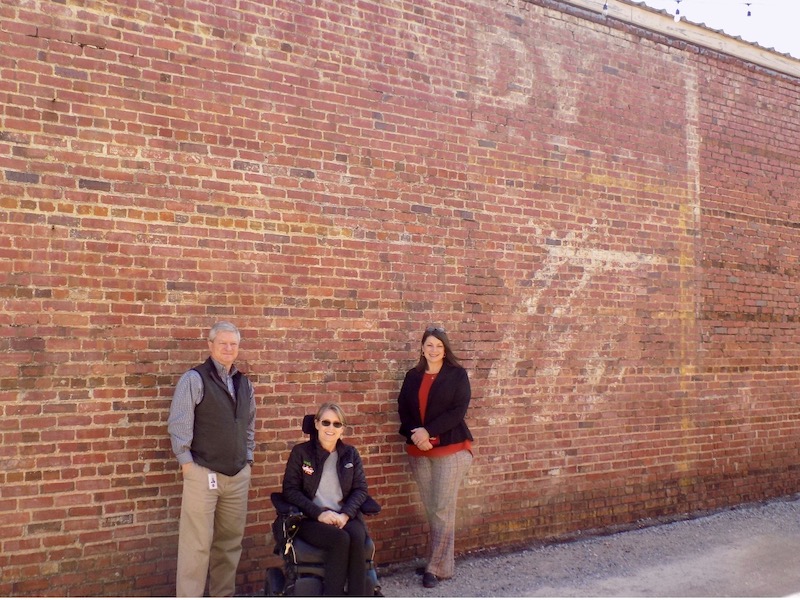 CALERA – Calera Main Street is asking for help from the community to find historical references for what is believed to be an old Coca-Cola advertising mural located in an alley off Highway 25 in downtown Calera. The program has plans to restore the old mural as part of revitalizing the historic district and adding public art to the area.

Calera Main Street met with several leaders from Coca-Cola Bottling Company United (CCBCU) to ask for help with the restoration process. Founded in 1902 and headquartered in Birmingham, CCBCU is the third-largest bottler of Coca-Cola products in the United States.

“It all started with a photograph, and that’s where we need the help of the public,” Jackie Batson, Calera Main Street executive director said. “Coca-Cola has graciously agreed to assist with the restoration but we first have to find an old photo of what the mural used to look like. Many small towns all over the country have revived these old “ghost” murals which essentially brings back a piece of Americana. It would be a shame not to pay homage to the past. There are many things that changed or were lost over time, but if we have the chance to save a bit of history, I believe we must.”

CCBCU has recently partnered with Quincy, Florida and Panama City, Florida to restore old Coca-Cola murals on their downtown buildings. This process starts with finding an image to work from, then an artist is selected, the actual painting takes place and finally a celebration of the finished work. Calera hopes to complete this project in 2023.

“We’re very excited that Calera Main Street approached us in their pursuit to restore such an iconic mural,” Andy Britton, public affairs and communications director for Coca-Cola United said. “We believe the opportunity to preserve this piece of the past is part of the foundation for the future growth of our company’s relationship with our customers and communities.”

The mystery of the mural, which has been a puzzlement to the community for years, is slowly being pieced together by members of the community and Calera Main Street.

“We have been speculating about what this mural used to say for years now,” Batson said. “The far right edge looks like an undeniable ‘L’ and ‘A’ from the famous Coca-Cola script. The 1940 census showed that the building was once the Gandy Supermarket. When we found that out, it made sense the ‘NDY’ at the top could have said ‘Gandy’. We are asking our friends and neighbors to look back at any old high school yearbooks, newspapers or family photos to see if we can find an image of it. It’s one of those things where it could possibly be in the background of a parade photo for example.”

The store would have been in business in the late 1930s, so it is speculated that the mural could have been visible between 1940 and the 1970s. If anyone has any information about the mural, the Gandy family or their business, please reach out to Calera Main Street at jackie@downtowncalera.org.