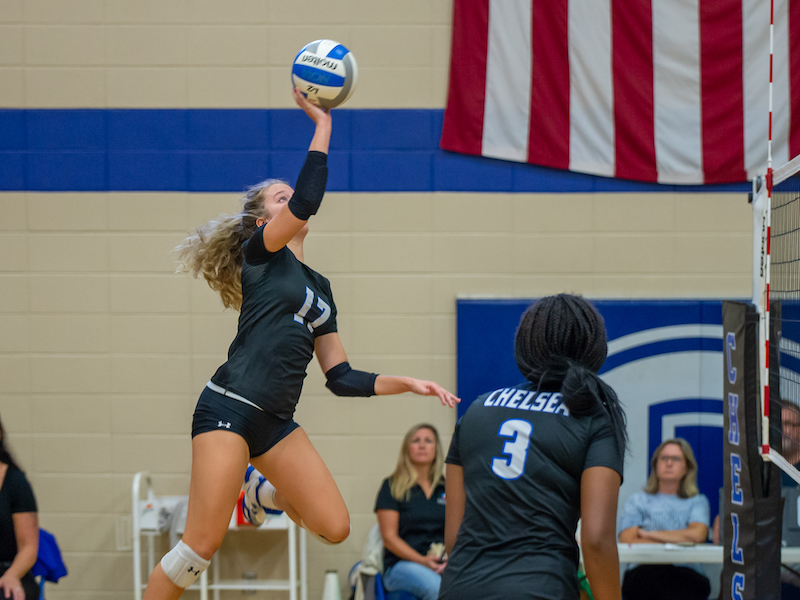 Chelsea's Emma Pohlmann finished her senior season as one of the top players in Shelby County this season, earning a spot on the All-County First Team. (For the Reporter/Larry Dancy)

Another special volleyball season in Shelby County is behind us, and it was another remarkable run for several local teams. The Pelham Panthers put together another special run to the Final Four, while several others won area titles and made their way to regionals.

Along with the special seasons, several standout players saw hard work pay off with impressive years on the court. We honor those players with our 2022 All-County volleyball team.

Outside Hitter: Emily Breazeale, senior, Spain Park. The leader in kills for Spain Park and one of the top players in the state, Breazeale totaled 470 kills for the Jags. She also added 219 digs, 28 blocks and 22 aces as part of another special season.

Outside Hitter: Averi Smith, senior, Pelham. Finishing second in kills for the Panthers, Smith put together an impressive senior season to lead her team to the Class 6A semifinals. Not only did she finish with 466 kills, but she added an impressive 562 digs, finished with the fourth-highest ace mark in the county at 68 and posted 38 blocks.

Outside Hitter: Cameron McMinn, sophomore, Pelham. McMinn also had a very balanced season for the Panthers. She led the team with 503 kills and totaled 379 digs, while she also finished with 49 aces and 31 blocks as a dynamic duo up front alongside Smith.

Outside Hitter: Emma Pohlmann, senior, Chelsea. Easily one of the state’s top outside hitters, Pohlmann finished her final season with 457 digs, 412 kills, 56 aces and 26 blocks. She also surpassed 1,000 career digs and had more than 1,100 career kills, bringing to an end a special run with the Hornets.

Middle Hitter: Megan Ingersoll, freshman, Spain Park. A young player for Spain Park, Ingersoll did a little bit of everything for the Jags this season. A future leader for the team, she finished second on the team with 259 kills, while she also added 61 digs, 16 blocks and nine aces.

Middle Hitter: Cydney Mitchell, senior, Thompson. One of the county’s leaders in blocks this season with 65, Mitchell was big at the net for the Warriors, also posting 229 kills. In addition to those numbers, she put together 87 digs and 16 aces.

Setter: Lilly Johnson, senior, Spain Park. One of the top assisters in the county this season, Johnson posted 529 assists, but her success didn’t stop there. She also added 125 digs and finished with 31 aces.

Setter: Kylee Hester, sophomore, Pelham. A promising young player for Pelham, Hester put together a jaw-dropping 1,293 assists this season to lead all players in the county. In addition to those numbers, she finished with 392 digs, 50 aces and 24 blocks.

Setter: Madison Moore, senior, Chelsea. An unreal senior season for Moore concluded with an impressive 815 assists to lead Chelsea and finish second in the county. In addition to that strong number, she also finished with 182 digs and 60 aces. She finished her high school career with more than 1,700 assists.

Setter: Olivia Kelly, junior, Thompson. Another player with an impressive assist total this season, Kelly put together 777 assists as one of the best in the county and the leader for the Warriors. In addition, she posted 161 digs, 44 kills, 35 aces and 28 blocks.

Libero: Brooklyn Allison, senior, Spain Park. One of the state’s best libero’s this season, Allison put together 431 digs and 60 assists, while she also finished second on the team with 38 aces. She held a passing average of 2.34.

Libero: Emma Studdard, senior, Pelham. The team leader in digs with 620, Studdard also totaled 112 assists and 44 aces as a senior leader for the Panthers during the 2022 season.

Outside Hitter: Laura Buchanan, sophomore, Chelsea. A young player on a somewhat veteran squad, Buchanan held her own this season by leading the Hornets with 416 kills. Beyond that high mark, she also finished with a county-high 79 aces, had 252 digs and 33 blocks. As a sophomore, she has already surpassed 650 career kills.

Outside Hitter: Stella Helms, junior, Briarwood. With 445 digs, Helms led Briarwood this season and finished fourth in the county. She also finished third in the county in aces with 69 and put together an impressive 361 kills.

Outside Hitter: London Wynn, sophomore, Pelham. Another young sophomore for Pelham this season, Wynn left her mark by putting together a balanced stat line that featured 365 digs, 348 kills, 61 aces and 35 blocks.

Outside Hitter: Hannah Locks, senior, Montevallo. A senior for the Bulldogs, Locks finished off a special career at Montevallo by totaling 234 kills, 40 aces and 191 digs.

Middle Hitter: Sydney Laye, senior, Chelsea. During her final season with the Hornets, Laye was able to put together a balanced attack of 202 digs, 154 kills, 43 aces and 35 blocks.

Middle Hitter: Tesia Purnell, senior, Montevallo. A leader in the middle for Montevallo, Purnell led the team with 18 blocks, while she finished second in kills and aces with 128 and 43, respectively.

Setter: Paige Johnson, senior, Montevallo. Johnson finished with the second-highest number of aces this season at 74, while she led the Bulldogs with 284 assists and added 109 digs.

Setter: Haley Thompson, senior, Spain Park. Thompson finished second on the team with 413 assists, while she led the team with 56 aces and totaled an impressive 114 digs.

Setter: Lauren Schuessler, junior, Oak Mountain. A leader for Oak Mountain as a junior, Schuessler finished in a tie for second in the county with 74 aces, while she also added 424 assists, 238 digs and 152 kills.

Setter: Kylie Scoles, sophomore, Helena. Scoles was one of many young leaders for Helena this season. The sophomore finished with 489 assists, 267 digs and 31 aces for the Huskies.