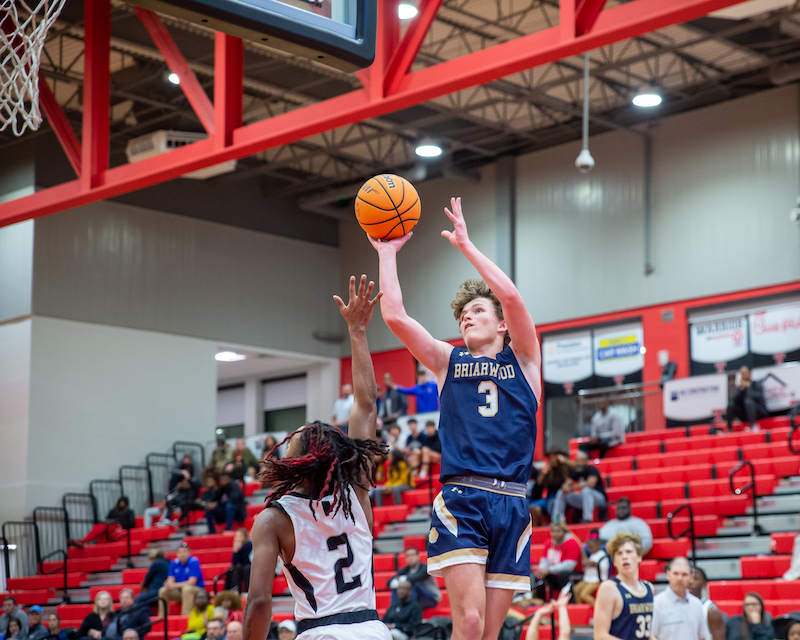 The Briarwood boys basketball team took down Sylacauga on the road for the first time since 2008 with a 65-53 win on Tuesday, Nov. 29. (File)

SYLACAUGA – A big second quarter and a balanced attack with eight players scoring points was more than enough to lift the Briarwood Lions to their first road win against Sylacauga since 2008 on Tuesday night, Nov. 29.

The Lions trailed by five at the end of the opening quarter, but the caught fire and scored at least 16 points in every period the rest of the way to pull away for a 12-point 65-53 victory.

In the opening quarter, Briarwood only knocked down three shots in addition to two free throws to total nine points, while Sylacauga hit seven of eight from the free throw line and made three shots to take a 14-9 advantage in the early going.

The Lions, however, responded with a big second quarter that shifted momentum in their favor.

Not only did they limit Sylacauga to seven points, which became the Aggies’ worst quarter of the game, but Briarwood got a made shot from seven different players, including three from four different players.

That allowed the Lions to outscore Sylacauga 18-7 in the quarter, which was more than enough to erase the deficit, as they took a 27-21 lead into the half.

Despite two tight quarters in the second half, Briarwood’s offense had found its rhythm and wasn’t outscored the rest of the way.

In the third quarter, it was another balanced effort of six players scoring to lead the Lions to 16 more points, as they extended the lead by on emore to take a 43-36 advantage into the final quarter.

That is when the offense really picked up the pace for Briarwood. Grant Mears knocked down two 3-pointers in the final quarter, while Drew Mears and William Lloyd each hit two field goals and Zac Lamey drained his second 3-pointer of the game.

The dynamic scoring led to 22 points, as the Lions pulled away for the 12-point victory.

Lloyd led the way for Briarwood with 12 points, nine of which came in the second half. He hit two 3-pointers and three additional shots, while Drew Mears finished one point behind with 11 thanks to at least one made shot in each quarter of the game.

Both Caleb Keller and Grant Mears added nine points with Mears hitting three from beyond the arc. Lamey added eight points, while Luke Schultz finished with seven, Matthias Leib with five and Garrett Witherington with four.