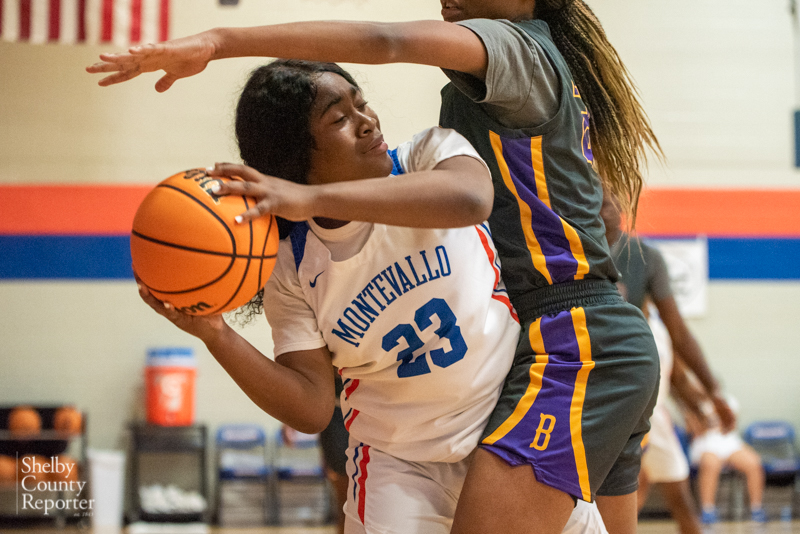 MONTEVALLO – After defeating Holy Catholic Academy on Monday night, both the girls and boys defeated Thorsby at home on Tuesday, Nov. 29. The girls won 58-48 and the boys won 70-40.

The Montevallo Bulldogs started the evening on a high note after gaining a 15-10 lead in the first quarter against Thorsby. However, Thorsby obtained a comeback in the second quarter and trailed only one point behind the Bulldogs.

Montevallo led 25-24 before the second half started and returned with a different mentality.

The Bulldogs became more offensively aggressive in the final quarter, after having been limited to only gaining nine points in the third quarter. Montevallo picked up 24 points of its own in the fourth quarter solidifying its latest win against Thorsby.

The match-up totaled 53, 33 against Montevallo and 20 against Thorsby.  Despite the numerous foul calls on Jai-lin Ivory, Ivory was able to score 31. This set a career record for Ivory which puts her over 1000 points for her high school career.

Montevallo’s boys team continued the winning mentality into their game Tuesday night. With a strong offensive performance in the first quarter against Thorsby, the Bulldogs led 24-6.

Thorsby made a major comeback in the second quarter after totaling 21 points. The Bulldogs totaled 15 points of their own and still maintained the lead before the first half concluded.

Chism continued to lead the Bulldogs in the second portion of the first half after obtaining four points. Rodgers finished the second quarter with the last basket outside the arc before the half was called. Dee Cutts, Rutledge and Ross totaled a combined six points.

The Bulldogs totaled 20 points in the third quarter. Chism gained another seven points from one basket knocked down outside the arc and two within.

Rodgers and Ben Locks followed Chism with five points of their own and Ross topped off the Bulldogs’ score with another two points.

The final quarter concluded Montevallo’s win with another 11 points for the Bulldogs. Gibson scored the final three-pointer of the night, while the other eight points came from Brannon Hudson, Jamarcus Thomas, Ross and Rodgers.

Montevallo will face Shelby County on Friday, Dec. 2 at home.