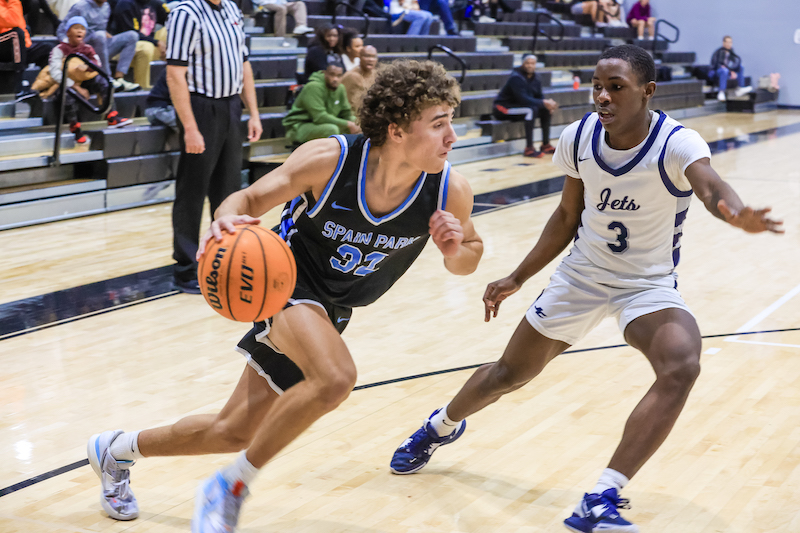 HOOVER – Spain Park fought until the very end in its boys’ basketball game against Clay-Chalkville on Tuesday, Nov. 29. The Spain Park Jaguars picked up the lead early on in the game, however, Clay-Chalkville managed to make things challenging for the Jaguars.

Maintaining an 8-0 for the first three minutes of the game, the Jaguars started the first quarter off with two baskets knocked down outside the arc from Zach Gray and Chase James. Slowly, Clay-Chalkville became more aggressive offensively and shot more three-points of its own.

Spain Park was able to finish the first quarter with a 14-12 lead after Clay-Chalkville tied the score in the fleeting seconds of the game. T.J. Lamar and Sam Wright totaled a combined four points. Gray went two for two at the free-throw line and James added two more points to the scoreboard.

Clay-Chalkville continued to make the second quarter of the game challenging for the Jaguars, having made several attempts to close the gap between the two teams. However, Spain Park continued to fight to extend its lead before the first half concluded.

The Jaguars totaled 17 points in the second quarter, with Gray having led Spain Park with seven points of his own. James and Wright shot a three-pointer each, while Jared Smith and Lamar knocked down one each inside the arc.

Spain Park led Clay-Chalkville 31-24 before the second half.

Wright went five for five at the free-throw line along with a two-pointer in the third quarter. Korbin Lane, Chapman Blevins and Gray totaled a combined six points. James knocked down his third three-pointer of the night and Smith gained one point from the free-throw line.

Spain Park limited Clay-Chalkville in the final quarter to only being able to obtain seven more points before the game concluded. The Jaguars fought to extend their lead one last time by picking up another 13 points Tuesday night.