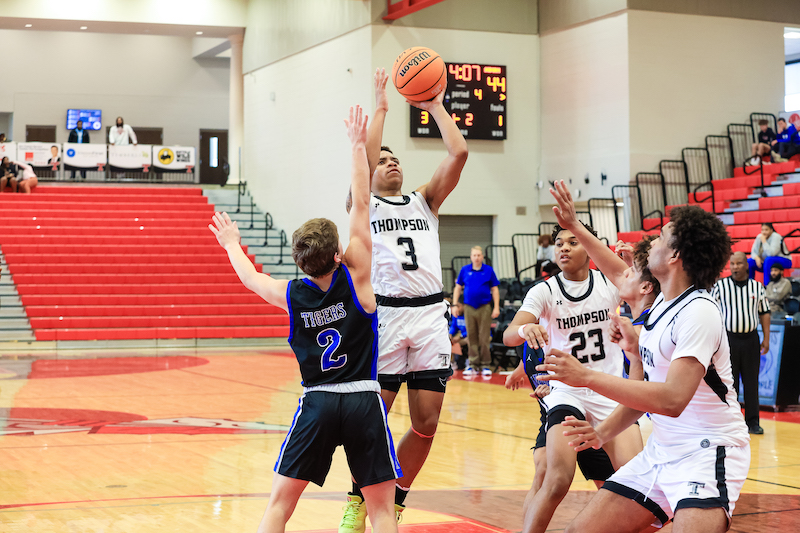 ALABASTER — The Thompson Warriors got a balanced effort from the whole roster Tuesday, Nov 29 as they welcomed Chilton County for a border war of sorts. The Tigers started out hot, but Thompson clamped down defensively and had a good mix of inside and outside shooting to avenge an early season loss with the 58-34 win.

Thompson (5-3) hit their first two threes of the game and four total in the first quarter, but Chilton County was able to keep it close behind eight points from JaKobe Worthy and seven from Jason DeJarrett. A three from Desahwn Morrisette just before the buzzer gave Thompson a 20-15 lead they would not relinquish.

The Warriors didn’t let the Tigers score more than three baskets in a quarter after that and stretched their advantage with a 7-0 run in the second quarter. A big key in the run was the way Thompson crashed the boards, collecting ten offensive rebounds before halftime. Thompson head coach DJ Black believes increasing the intensity in practices directly led to the way his team played.

Thompson didn’t let up coming out of the locker room either with five different players scoring in the third quarter. Between the middle of the third into the fourth quarter the Warriors strung together an 11-0 run for a comfortable lead down the stretch.

“Tre’s offense has been consistently there, tonight he locked in defensively and when you talk about rebounding and the 50/50 balls he was one of the guys who led energy-wise,” said Black. “José brought energy and the rebounding was phenomenal, if he can rebound like that we can be a different team.”

Black also commented on his talented freshman who is rapidly moving up the depth chart at Thompson.

“Colbern Landrew is a name everyone is going to know,” said Black. “He’s an unselfish player and the best thing about him is he gets better every single day. You talk about ceilings, there’s no limit to how good he can be.”

Thompson will host Chelsea in their next game this Friday, Dec 2 with the tip-off scheduled for 7 p.m.