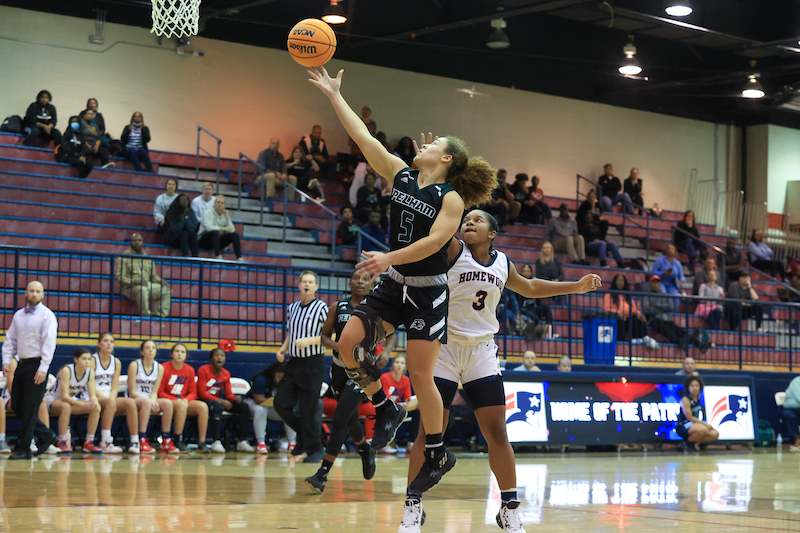 Calera hosted Pelham on Thursday, Dec. 1. (For the reporter/Dawn Harrison)

CALERA – Thanks to a decisive first quarter, Pelham’s girls’ basketball team was able to create enough separation from the Calera Eagles on Thursday, Dec. 1, to fend off a comeback and return home with a 54-26 victory.

In the opening quarter, both teams showed promise with the Panthers knocking down seven baskets, including a 3-pointer, while the Eagles put through four baskets and topped off the score with a single free throw.

Calera’s Tyeshia Williams and Makenna Cooper knock down a basket within the arc. Jada Blake finished the quarter with a basket from the free-throw line.

Limiting Calera gave Pelham the early advantage with a 15-5 lead at the end of the first quarter and held it steady throughout the game.

Pelham continued to knock down shots and the defense continued adjustments that would prevent Calera from making it to the basket. However, Jakalynn Johnson, Williams and Blake were able to pick up nine more points for Calera before the first half concluded.

King carried the second quarter for Pelham having totaled 10 points, two baskets made within the arc and two outside. Wynn and Hollingsworth knocked down a basket each and  Gogan added five points of her own to finish the first half.

Coming back from the break, Pelham found success again on the defensive end of the floor and made a comeback impossible for Calera. However, the

The Panthers halted most of the Eagles’ actions on the offensive end. Calera scored five points in the third quarter and seven points in the final quarter. Five points from Cooper, two from Zoe  Lenoir and William, and one point from the free-throw line from Blake.

King finished the night with six points. Hollingsworth totaled five more points and Wynn followed with four. Claire Robinson and Shea Gallagher knocked down a basket each, and Taylor Howard gained one point from the free-throw line.

Pelham takes on Prattville at home on Tuesday, Dec. 6, while Calera faces Northridge at home on Friday, Dec. 2.