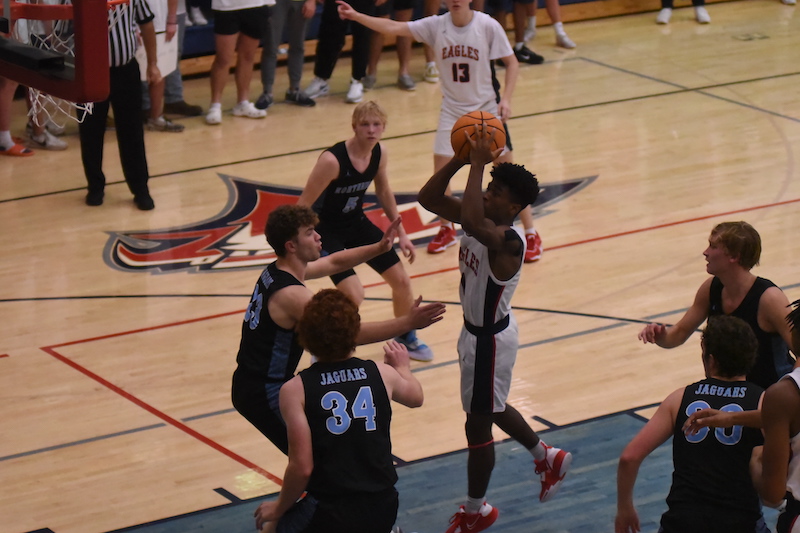 NORTH SHELBY – Picking up the lead in the first quarter by almost 10 points gave the Oak Mountain Eagles its edge in the Friday night county matchup against the Helena Huskies on Dec. 2. The Eagles defeated the Huskies 69-49.

Oak Mountain’s Matthew Heiberger had another strong performance after ranking up 25 points on Friday. Heiberger led the Eagles with six points from one three-pointer, a two-pointer and a single free throw.

Tre Thomas followed Heiberger with four points after knocking down a two-pointer and went two for two from the free-throw line. Kevin Jasinski and Emanuel Johnson totaled a combined four points for Oak Mountain.

The Eagles’ defense limited the Huskies to being only able to achieve five points in the first quarter. Helena’s Jordan Edwards and Alex Pierson both knocked down one basket each inside the arc.

Helena found success in the second quarter after making quick adjustments to its offense. The Huskies added 12 more points to the score before the half. Ian Johnigan carried Helena after totaling nine points before the third quarter. Johnigan knocked down one basket outside the arc and three within.

Nicolas Crozier and Josh King totaled a combined three points from the free-throw line to top off the Huskies’ first-half score.

Helena concluded the evening with 16 points in the third quarter and final quarter. Wright led the Huskies after knocking down two three-pointers and three two-pointers. Owen Davis followed Wright with 11 points.

Oak Mountain pulled away with a 20-point lead Friday night. Heiberger totaled another 15 points in the second half from two-three pointers, four two-pointers and a single basket from the free-throw line.

Oak Mountain hosts Huffman on Tuesday, Dec. 6, while Helena travels to Chelsea for its next county matchup.