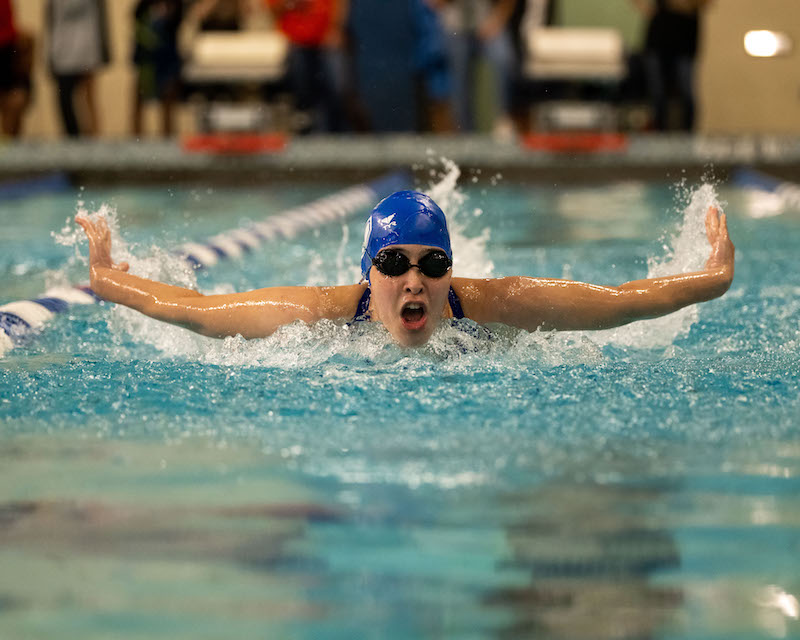 AUBURN – Spain Park, Chelsea and Oak Mountain all traveled to Auburn University for the Swimming and Diving State Competition. Several swimmers advanced to the final round on Saturday, Dec. 3 after receiving qualifying times at Prelims on Friday, Dec. 2.

Spain Park finished sixth overall in the state for the 6A-7A classification in the swimming division.

Reese Reynolds, Anna Grace Lynch, Carson Muir and Joceyln Reynolds finished in fourth place for the Girls 200-yard medley relay with a time of 1:51:80. The relay had cut their time down by a little over a second from its preliminary time of 1:52:91.

Junior Ella Browning finished 22 overall in the state for the 200-yard freestyle after her performance in the preliminary round. Unfortunately, Browning didn’t qualify for the championship round with her time of 2:06:18.

Muir made a huge splash in the 100-yard Butterfly. Muir placed third in both the preliminary and championship round of the event. Muir cut her time down from 58.17 to 57.51.

Jocelyn Reynolds represented the Spain Park Jaguars in the 100-yard Freestyle finishing in third place in prelims and finals. She finished with a final time of 53.17.

In the 15th event of both the prelims and finals, Muir finished in third place in the 500-yard freestyle in the Prelim and then finished in first place in the final round. Muir cut down her prelim time from 5:16.88 to 5:04.64.

Jocelyn Reynolds finished in fourth place in the prelims and finals in the 500-yard freestyle. Her final time was 5:19.66. Browning placed 15th on both days with a final time of 5:37.56, one second less than her prelim time.

Coming in 12th place in the 200-yard Freestyle relay with a time of 1:45.20, the Jaguars’ Josie Corgill, Carrie Corgill, Allie Stafford and Browning cut down their prelims time by one second.

Spain Park placed fourth overall in the 400-yard Freestyle relay. Carrie Corgill, Jocelyn Reynolds, Muir and Lynch cut their time down from 3:40.68 to 3:39.16.

The Chelsea Hornets placed 11th out of the 27 teams that placed in the championship.

Kennedy Cleasant, Alexandria Morgan, Sam Cairnes and Caitlyn Kelly finished in 12th place with a time of 1:56.91 in the 200-yard Medley Relay. The relay cut down their final time by two seconds.

Morgan qualified for finals with a prelim time of 2:02.65 and placed 11th in the 200-yard Freestyle. Morgan finished ninth in the state when she cut down her final time to 1:59.08.

Morgan went from sixth place in prelims to fifth place in finals for the 500-yard freestyle. Morgan’s final time in the event was 5:24.19.

In the 100-yard Backstroke, Cleasant placed fourth at prelims with a time of 59.45. The following day at finals, Cleasant finished in third place timing at 58.14.

In Chelsea’s final event of the championship, Morgan, Kelly, Cairnes and Cleasant finished eighth overall in the 400-yard Freestyle relay. The relay’s final time was 3:52.35.

The Oak Mountain Eagles placed 19th overall in the state for the Class 6A-7A Division.

Norah Simich finished in third place in both prelims and finals for the 200-yard Freestyle. Simich’s time went from 1:56.06 at prelims to 1:56.06 at finals.

Simich also competed in the 100-yard Butterfly for the Eagles. Simich jumped from her seventh ranking spot at prelims to finish 4th at finals. She cut her time down from 59.43 to 58.02.

Mia Eiller was the only diver from Shelby County to represent the community in the diving portion of the State Championship. The diver from Oak Mountain’s semi-final score of 175.60 qualified her for finals.

Eiller finished the event by placing 11th in the state with a score of 249.35.