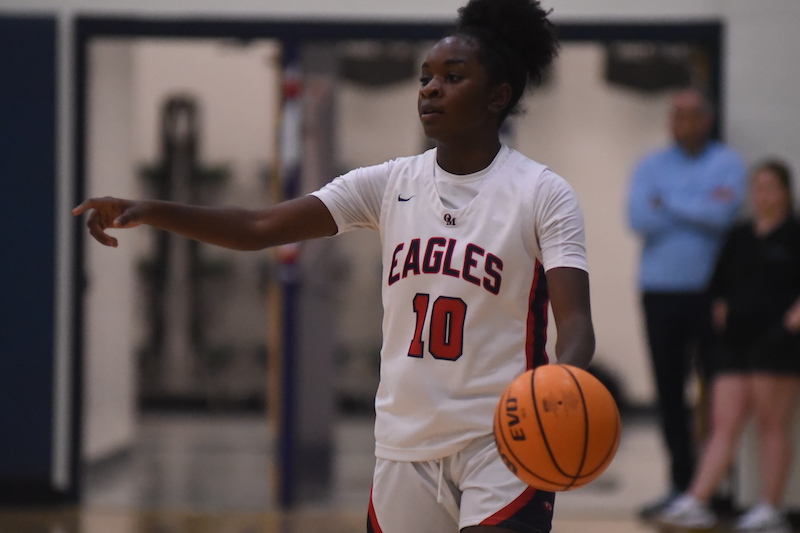 NORTH SHELBY – The Helena Huskies girls’ basketball team put up a fourth-quarter battle against the Oak Mountain Eagles on Friday, Dec. 2. Helena was able to make a close comeback after its third-quarter 36-28 deficit. However, the Eagles were able to overcome the Huskies 47-44.

Oak Mountain started the evening off holding a 4-0 lead for the first several minutes of the first quarter. Helena narrowed the gap between them and Oak Mountain shortly after, the Huskies trailed 6-5 before the Eagles knocked down one basket before the second quarter started.

After being limited by the Oak Mountain defense in the first quarter, Helena was able to gain 10 more points before the first half concluded. The Eagles were able to tag on 12 more points for their 20-15 first-half lead.

Olivia Johnigan led the Huskies in the first two-quarters of the game with 12 points. Johnigan knocked down two baskets inside the arc and two baskets outside the arc. Jaterrica Moody followed with five points.

The Eagles’ Lucy McKeown led in the first half with six points from two three-pointers. Raegan Whitaker followed with five points.

Returning for the break, a fired-up Helena adjusted its offense for the second portion of the game. Although the Eagles led 36-28 before the final quarter, the Huskies made the fourth quarter a challenge for Oak Mountain.

Johnigan had another powerful performance in the second half. Johnigan totaled another 10 points from four baskets from the free-throw line and two three-pointers.

Helena tied up the score within the fourth quarter, however, Oak Mountain was able to achieve its latest victory after Holt carried the Eagles with nine points. Holt knocked down three baskets inside the arc and one within.

Oak Mountain hosts Huffman on Tuesday, Dec. 6, and the Huskies travel to Chelsea for their next county matchup.