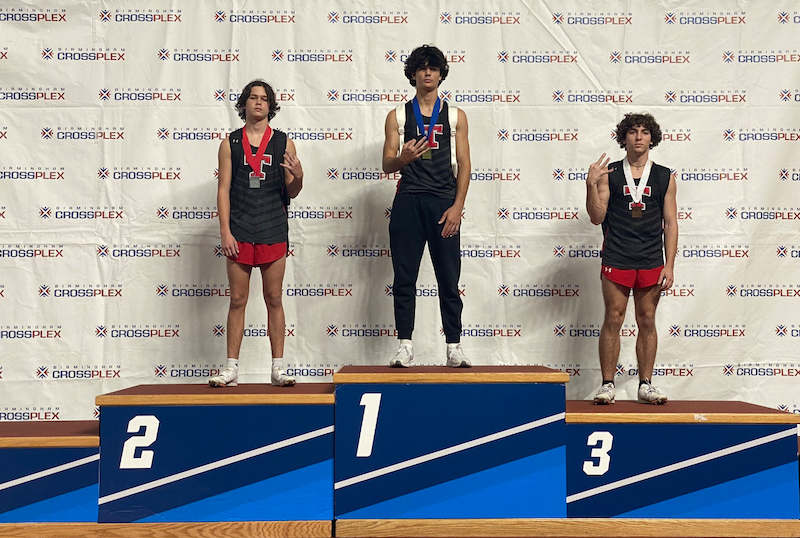 BIRMINGHAM –  Track and field season is officially underway as the Magic City Invitational that was held at the Birmingham CrossPlex kicked off the season. Chelsea, Thompson, Calera, Helena,  Pelham and Shelby County all competed in the Boys’ races and events.

Chelsea had several members placed within the top 10 for several events. In the 60-meter dash. Brandon Sim finished in fifth place with a time of  7.21. Eryk Brown came in ninth place timing at 7.31.

The Hornets’ relay team placed fifth in the 4X200-meter relay and Raymond Bridgeman came in fifth place in the triple jump with a score of 37-11.75.

The Thompson Warriors performed well in many of the events in the Magic City Invitational. Kayden Washington came in seventh place in the 60-meter dash with a time of 7.24.

Coming in fifth place for Thompson in the Long Jump, Amari Jackson went 18-10.75. And Ethan Milton came in third place in the Triple Jump.

Thompson took the top three spots in the Pole Vault with Gavin Horton coming in first, Greyson Horton placing in second, and Cameron Lacey in third.

The Pelham Panthers were also present at the Invitational on Saturday and performed well in the events.

Pelham’s Michael Kuper finished fourth overall in the 1600-meter run with a time of 4:41.56. In the 60-meter hurdles, Marshall Watts came in third place timing at 9.19 and Anthony Sanders placed seventh with a time of 9.63.

With a time of 49.79, Christopher Thomas came in first place in the 400-meter run for Calera. Braylyn Farrington placed second overall in the 60-meter timing at 7.00 and the relay team finished in third place in the 4X400-meter relay.