Montevallo knocks down win against Calera 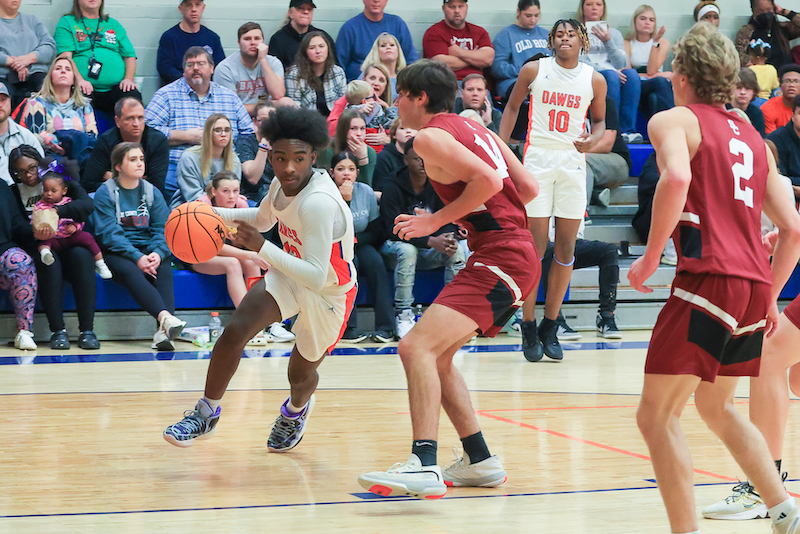 Calera hosted Montevallo on Monday, Dec. 5. (For the Reporter/Dawn Harrison)

CALERA – Back-to-back county matchup wins on the road for the Montevallo Bulldogs to kick off the month of December. After defeating Shelby County on Friday, Dec 2, the Bulldogs took down the Calera Eagles in Calera on Monday, Dec. 5.

Ja’Von Chism carried the Bulldogs during the Monday night matchup after totaling 28 points. In the first quarter, Chism knocked down four two-pointers.

Javon Rogers followed Chism with 25 points. Rogers went two for two at the free-throw line and knocked down an additional two points in the first quarter. Dee Cutts tagged on two more points for the Bulldogs before the second quarter started.

Montevallo picked up another 10 points before the first half concluded. Rogers knocked down four points. Jamarcus Thomas, Ben Locks and Cutts totaled a combined six points in the second quarter.

The Eagles trailed behind 24-20 before the second half started. Calera adjusted its offense and totaled 13 points in the second quarter. Caldwell led the Eagles before the first half ended totaling five points.

Isaiah Daniel knocked down the only basket made outside the arc for Calera. DJ Goodman, Austin Brooks and Coxwell tagged on a combined five points to the Eagles’ halftime score.

Returning from the break, Chism’s strong third-quarter performance helped maintain Montevallo’s lead. Chism knocked down three baskets outside the arc and two within.

Keiston Ross, Locks and Rogers tagged on two more points each for Montevallo.

Calera kept the game close, the Bulldogs only led 43-40 before the final quarter. Caldwell totaled another 10 points for the Eagles. He totaled two points from the free-throw line and totaled eight points from four baskets.

Brooks totaled two more three-pointers for the Eagles, along with a single two-pointer. DJ White tagged on another two points before the fourth quarter started.

Montevallo finished the night with yet another county battle victory with a powerful performance from Rogers. Rogers finished the fourth quarter with 10 points from four free throws and three two-pointers.

Caldwell concluded the final quarter with another seven points, while Kane Burns followed with six points from two baskets knocked down outside the arc. Coxwell topped off the Eagles’ final score with a single free throw.

The Bulldogs travel to Jemison on Tuesday, Dec. 6, while Calera hits the road to Tuscaloosa County on Thursday, Dec. 8.