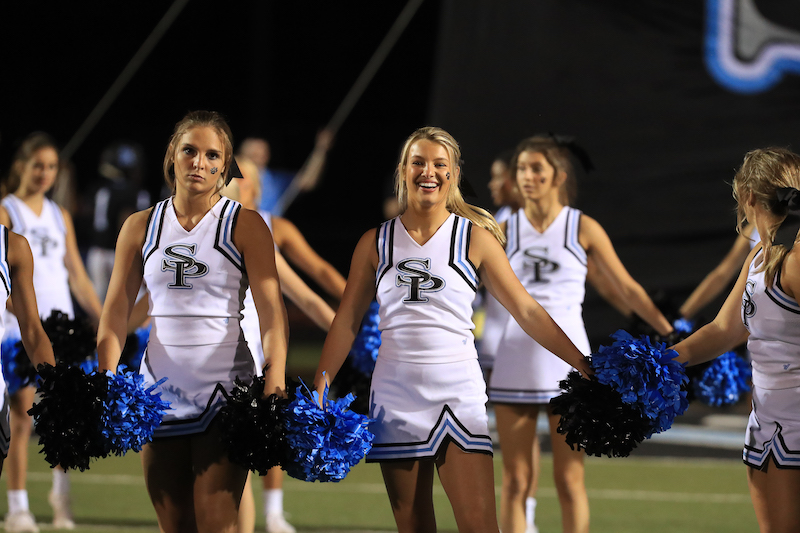 Local cheer teams competed in the State Championship at the Birmingham CrossPlex on Monday, Dec. 5. (File)

BIRMINGHAM – During the fall season, the cheerleaders in Shelby County were not just practicing to cheer on their school under the lights on Friday nights. On Monday, Dec. 5, several teams competed in the State Competition for the 6A and 7A Cheer divisions at the Birmingham CrossPlex.

Spain Park, Chelsea, Oak Mountain, Thompson, Pelham, Briarwood, Calera and Helena all competed in the Game Day format for Regionals and Finals. This event was a mix of band chant, a situational sideline led by a cue from the announcer that moves into the crowd-leading section and ends with the school’s fight song. Teams were permitted to use materials to execute their game day environment at their school. Each routine was limited to a three-minute maximum.

Based on the official AHSAA scoring sheet teams had to complete the following to receive their state ranking, situational sideline, crowd-leading cheer, overall impression, band chant, fight song and the overall impression of the team. This judged teams on techniques, sharpness and placement, proper use of signs, pom, megaphones and flags, stability, synchronization, spacing and so on.

In the 6A division for the Game Day event over 25 schools competed. Calera finished second overall in the state. Briarwood, Pelham and Helena placed within the top 20. Briarwood placed 10th, Pelham came in 13th and Helena finished 19th.

Spain Park and Chelsea finished in the top 10 in the Varsity cheer portion of the competition. The Varsity portion of the State competition is a separate event from Game Day. The event judges teams based on running group tumbling, dancing, techniques, execution and choreography to name a few. The Spain Park Jaguars placed second overall, and the Chelsea Hornets came in ninth place.

With football season coming to an end, the cheerleading teams cheer on basketball and prepare for future competitions such as the UCA International All-Star Championship held at the ESPN Wide World of Sports at the Walt Disney World Resort in Orlando, Florida this upcoming spring.