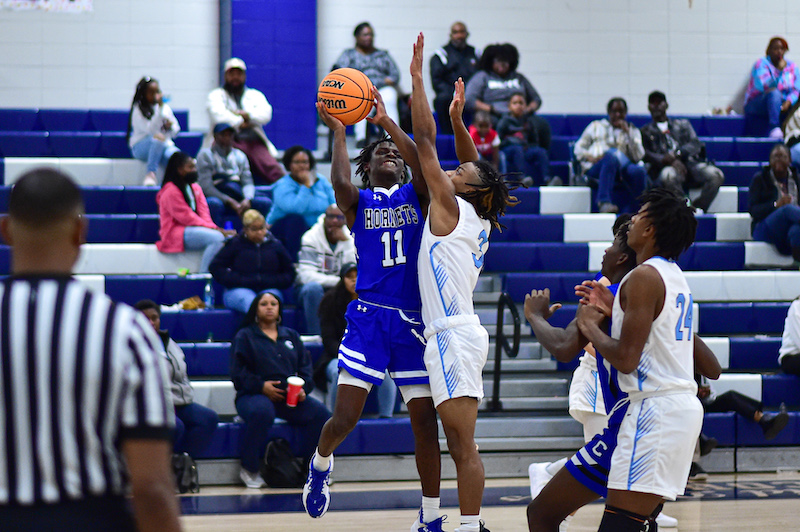 Chelsea’s boys basketball team used a dominant defensive effort against Sylacauga on Dec. 8 to pick up a 68-49 win. (For the Reporter | Jeremy Raines)

SYLACAUGA – The Chelsea boys basketball team continued to show its defensive strength against the Sylacauga Aggies on Thursday, Dec. 8.

Chelsea held the Aggies to seven points in the first quarter and six points in the second quarter, while the offense created separation with a 39-point first half to pick up a 68-49 victory.

The Hornets executed everything they needed to in the first quarter to set the tone for the game.

Paul Lanzi knocked down two three-pointers and went two for two from the free-throw line in the first half, while MJ Conrad made four baskets for nine of the Hornets’ 39 in the half.

Jaxon Shuttlesworth tagged on five points from one two-pointer and three baskets knocked down from the free-throw line. Christen Whetstone totaled two two-pointer and a single free throw.

Avery Futch added four baskets inside the arc and Gavin Collett knocked a basket down outside the arc.

Sylacauga was able to obtain 36 more points before the game concluded, however, a comeback was unattainable since the Hornets continued to extend their lead into the second half.

Chelsea’s 39-13 first-half lead was more than enough cushion for the Hornet in the last two quarters.

Aiden Owens and Shuttlesworth led the way for Chelsea in the second half with eight points, Whetstone added five, Futch totaled four and EJ Hudnall tagged on two to top off the Hornets’ latest victory.