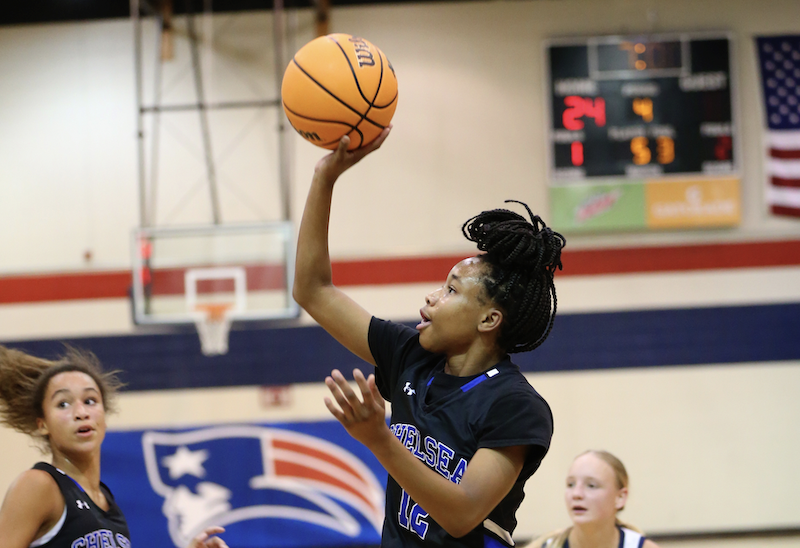 SYLACAUGA – Chelsea’s girls basketball team continues to knock down wins this season from powerful offensive performances in the first half. The Hornets recently took down Sylacauga in a blowout on Thursday, Dec. 8.

The Hornets held the Sylcacauga to six points or less in all four quarters of the game, while the offense created separation with a 22-point opening quarter to pick up a 59-13 victory.

Thanks to eight different players scoring points totaling four or more points each, the Hornets were able to secure their latest win early in the night.

Caroline Brown knocked down five two-pointers, while Sophia Brown made four baskets for six of the Hornets’ 34 in the first half. Sadie Schwallie added a three, Olivia Pryor drained three baskets and Madison Moore tagged on another four points to help create a killer period offensively.

Chelsea wasn’t just dominating the court offensively. The strength of the Hornets’ defense limited the Aggies to only six points in the first quarter and five points in the second quarter.

Returning from the break, Chelsea continued to hold back Sylacauga for the remainder of the game. The Aggies finished the night with only two more points in the third quarter. The Aggies could not knock down a single basket in the game’s final quarter.

Pryor led the Hornets in the second half after knocking down three baskets totaling six points. Nora Breedlove followed Pryor with five points. Breedlove knocked down one basket inside the arc and another outside the arc.

Chelsea returns home on Monday, Dec. 12 to take on the Aggies again.