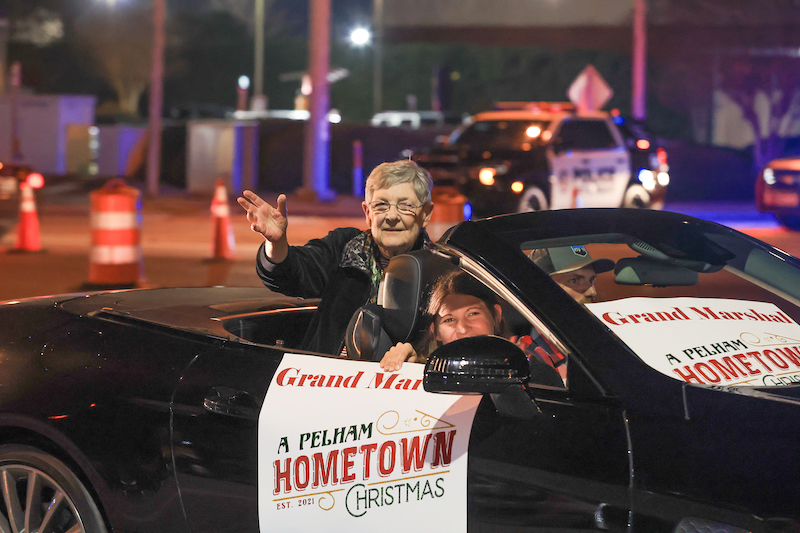 The city of Pelham held its second Christmas parade and tree lighting on Saturday, Dec. 10. (For the reporter/Dawn Harrison)

PELHAM – Pelham Strong and the city of Pelham selected June Fletcher as the Grand Marshall of the Pelham Hometown Christmas Parade.

Fletcher rode down the parade route in a black topless car, with a parade sign that read “Grand Marshall” and waved to the parade attendees.

“Mrs. Fletcher has been involved in the community in many ways since she first moved to Pelham from San Jose, California in 1991,” read a city of Pelham Facebook post. “A longtime fixture at Pelham City Council meetings and a member of several boards within the city, Mrs. Fletcher said she believes citizens need to have a sense of what is going on in the community, including what the problems are and how individuals can help.”

Fletcher said she couldn’t believe she had been given the honor of being named the Grand Marshal of the second Pelham Hometown Christmas Parade.

“To know that someone thought enough of me to ask me to serve in this way is just such an honor,” Fletcher said. “I don’t think you should complain if you’re not willing to get involved.”

The city of Pelham congratulate Fletcher and thanks her for her service. More information on June Fletcher can be found at Facebook.com/CityofPelham.