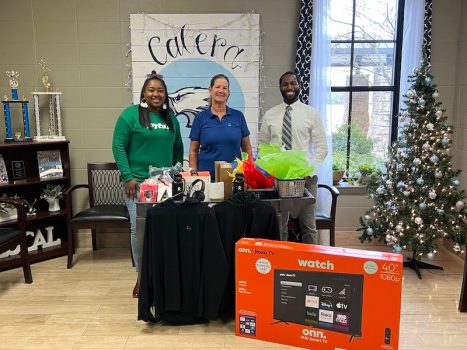 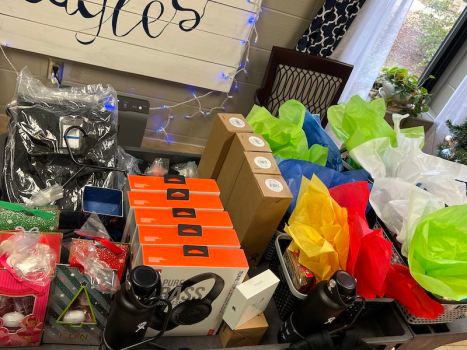 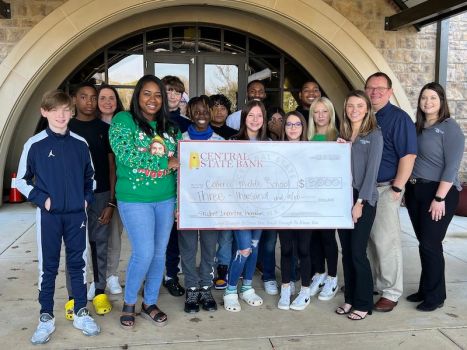 Calera Middle School receives a donation of multiple prizes from Lhoist to go toward a student incentive program. (Contributed)

By SCOTT MIMS |Special to the Reporter

The two companies recently donated funding and prizes to go toward student incentives, with Central State Bank presenting a check to CMS for $3,000 and Lhoist contributing various prizes such as a smart TV, AirPods, hydro flasks, hoodies, JBL headphones and gift baskets.

“As students show mastery on grade level standards and exhibit growth, they will be rewarded using the prizes and funds donated by the two companies,” said Calera Middle School Principal Desaree Jackson, noting that the school uses software called i-Ready to help fill in academic gaps and track student performance.

The i-Ready program correlates to the state standardized test, the ACAP (Alabama Comprehensive Academic Placement), and students use the program on a daily basis to fill in academic achievement gaps. Students take three diagnostic tests per year to help assess their academic growth to ensure that they are on track to reach end-of-year growth goals.

“We think it’s important for our students to become leaders of their own learning,” Jackson said. “In doing this, students need to be able to have a conversation about their current academic standing and be able to set goals for themselves. Students have participated in data chats with administrators where their individual data was analyzed and goals were set for the end of the year. As they continue to work hard throughout the school year, we want to be able to provide an academic incentive to boost their intrinsic motivation.”

CMS planned a growth party for Wednesday, Dec. 14 for all students who have shown academic growth from the first diagnostic test to the second test. During the party, prizes from Lhoist will be presented, while the donation from Central State Bank will help the school celebrate every student’s academic success, Jackson said.

The principal added that the program allows students to have a goal-setting conversation that includes their data, in hopes that students will better understand the purpose behind ACAP testing.

“We needed them to care about their education,” she said. “We also wanted to make sure that they knew the ‘why’ behind state standardized testing. These scores are reported to the state and are reflected on our school’s yearly state report card. We knew that the key to getting accurate results and increasing our score on the state report card is to make sure that the students take the test seriously. We hope that the academic rewards will boost their motivation to try.”