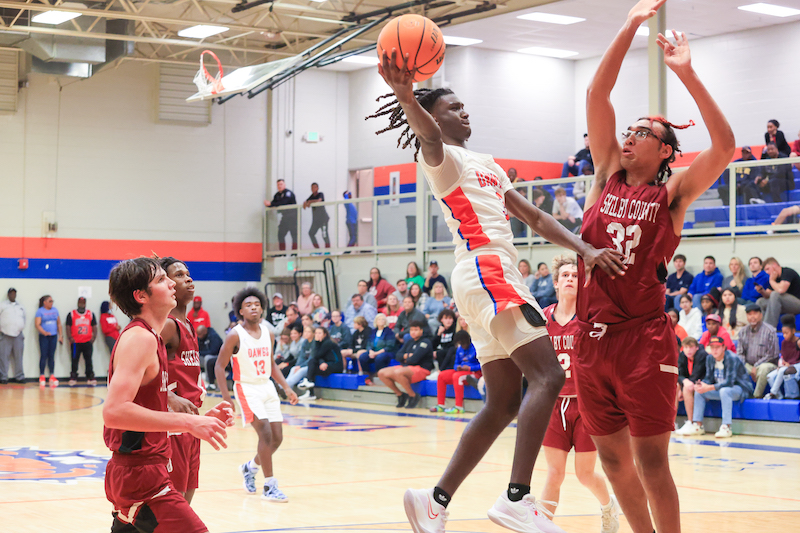 Montevallo defeated Calera in overtime at the University of Montevallo on Tuesday, Dec. 13. (File)

MONTEVALLO — The Montevallo offense pulled away with a second-half win against Calera during the recent county matchup between the two boys’ teams on Tuesday, Dec. 14, at the University of Montevallo. Not only did they overcome their 19-15 first-quarter deficit and tied the game up before the break, but they also picked up the lead in the third quarter and ran with it.

The Huskies totaled two strong offensive quarters in the first half with 17 and 18 points to kick off the game that led to Helena winning the county battle against Calera. Montevallo fought back in the second quarter to tie the score 30-30 before the break.

Brandon Caldwell had a powerhouse performance for Calera in the first half, Caldwell knocked down one basket outside the arc and four inside the arc. He also went two for two from the free-throw line.

Montevallo was able to pick up the lead in the third quarter by six points before Calera put up a battle in the final quarter. The Eagle posted 22 points in the fourth quarter, leaving the score tied and sending the game into overtime.

Caldwell led the Eagles again in the second half after knocking down three two-pointers and four baskets from the free-throw line. Cameron Coxwell followed Caldwell with six points from four free throws.

DJ White posted five points for the Eagles in the second half, while Jayden Hall knocked down a basket outside the arc. Tra’mun Gaines, DJ Goodman and Roleson totaled a combined eight points.

Rogers led Montevallo in the second half after totaling 13 points. Rogers knocked down two baskets inside and two outside the arc while tagging on three more baskets from the free-throw line.

While most overtime situations see more offensive actions by both teams, Montevallo’s defense limited Calera to only being able to obtain three points in the extra time. The Bulldogs secured their victory after the offense posted 13 points.

Montevallo’s Rogers knocked down two two-pointers and a free throw in overtime, while Chism tagged on another two two-pointers. Cartwell and Rutledge both went two for two from the free-throw line.