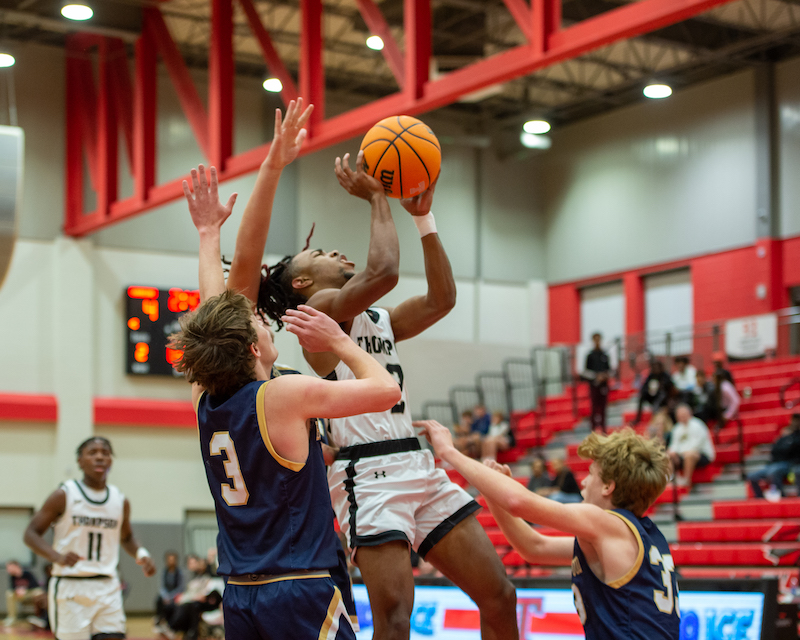 HELENA — After trailing Helena in the first half of the game, the Thompson Warriors overcame its 16-14 deficit after a successful offensive performance in the second half. Thompson pulled away with a 40-37 win in its latest county battle against the Helena Huskies.

The Huskies picked up a slight lead in the first quarter of the game and managed to maintain it for the rest of the half. The Warriors didn’t make things easy for Helena and kept the game close. Thompson trailed Helena 16-14 before the second half began.

Josh Williams knocked down the first two baskets outside the arc for the Huskies in the first quarter, along with two two-pointers and two free throws. Nick Crozier and Ian Johnigan both gained two points each.

Thompson’s Damien Wooley knocked down two field goals totaling four points. Jose Gonzalez knocked down the only basket outside the arc for the Warriors in the first half. Jay Green topped off the halftime score with an extra two points.

Helena continued to create more separation before the final quarter after returning from the break. However, Thompson finished the fourth quarter with a much more offensive mindset and posted 19 points to win the county matchup.

The Warriors’ defense also limited the Huskies to only being able to maneuver Thompson for another nine points before the game concluded.

Williams continued to carry the Huskies in the second half of the game. Williams knocked down three baskets inside the arc, one outside the arc, and one from the free-throw line. Jacob Satterfield and Trevor Moore made a single three-pointer and Owen Davis knocked down a two-pointer.

Thompson’s Carson Pringle led with three two-pointers, a three-pointer and a single basket from the free-throw line. Gonzalez followed Pringle with two baskets outside the arc, one knocked down inside the arc and one from the free throw line.

Thompson took down Helena in one last thriller quarter 40-37.