For the second year in a row, two local coaches will share the honor of Shelby County Coach of the Year after remarkable seasons at their respective schools.

This year, Freeman will once again earn the Coach of the Year honor after leading the Warriors to their fourth consecutive Class 7A State Championship, while Vincent’s Lucas Weatherford has also earned the title.

It was obvious for a while this year that Weatherford would represent with this award whether by himself or sharing it after what he did to help the Yellow Jackets accomplish school history. 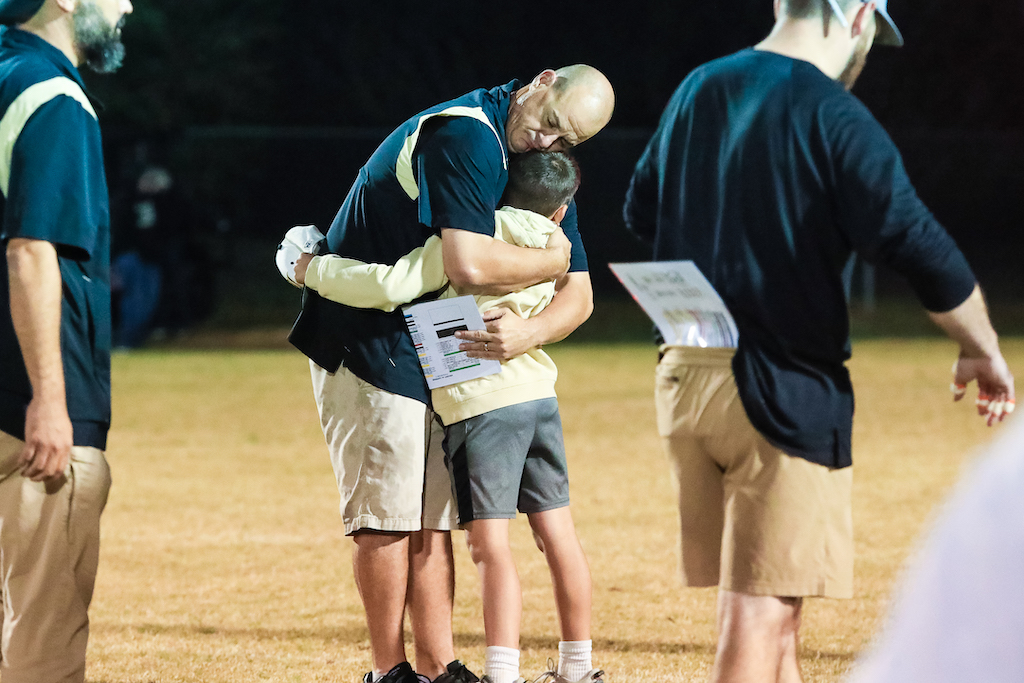 The Jackets missed out on winning the region championship by one point in a 36-35 loss to B.B. Comer, but they didn’t let that moment define them. Instead, Weatherford got his team to focus on the bigger picture, and it was another 36-35 game that made history for this year’s group.

With an incredible 36-35 comeback victory against Luverne on Nov. 4, the Jackets not only won their first playoff game since the 2011 season, but they picked up their 10th win in a season for the first time ever.

“Regardless of what happens the rest of the season, this is program defining for this place. It’s special,” he said after that win. “This is what we’ve been trying to get to. Things don’t happen overnight. It’s a process, people have to work. It’s a lot of work that goes into it. These seniors were eighth graders when I came in. They’ve seen it. They changed it. It wasn’t something I did, they did it. This isn’t the end, this is just the start. It needs to be like this from now on. We’ve finally changed the mindset.”

They went on to lose 43-28 to defending Class 2A champ Clarke County a week later, but a senior class that had only won two games as freshmen finished the season 10-2 overall with school history attached to their names.

It continued a special effort for Weatherford, who has led the Jackets to back-to-back winning seasons for the first time since 2012-2013 and has gone from a combined eight wins his first three seasons to a combined 16 the last two.

This year, the Jackets scored 45.1 points per game, setting a team record with 541 points scored, and gave up 18.7 with many of the team’s players playing on both sides of the ball.

Those numbers were more than enough to give Weatherford this year’s Coach of the Year honor.

He will share it with Freeman, who put together another historic run leading the Thompson Warriors. 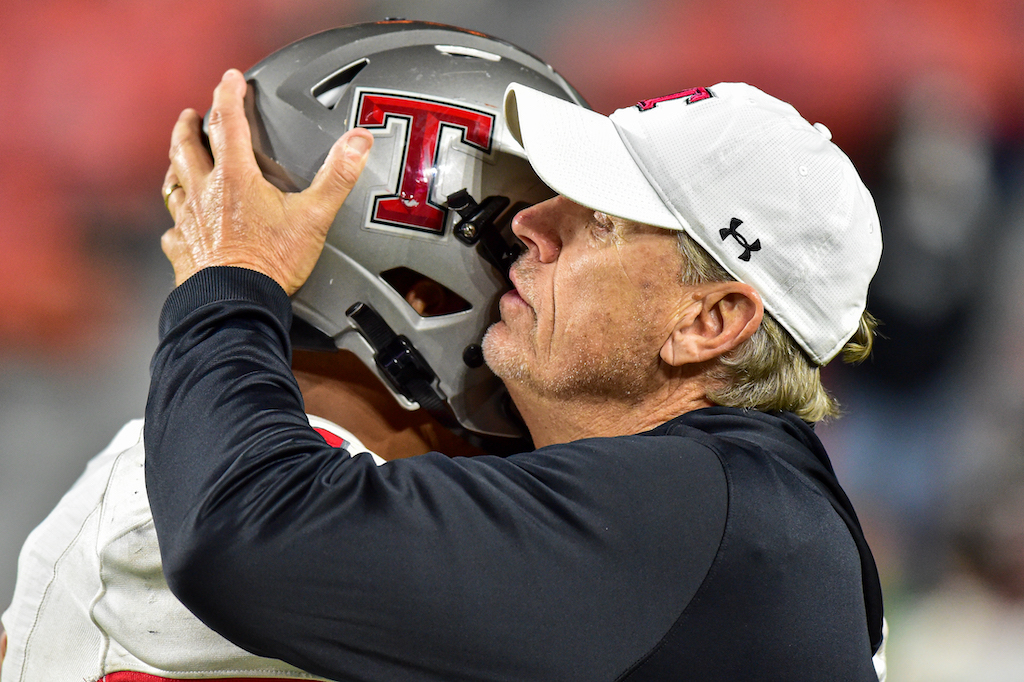 Freeman, however, still got an entirely new offensive unit and several new faces on defense ready to play.

Yes, they still had some of the top talent in the state, including guys like Peter Woods, Tony Mitchell and Anquon Fegans on the defensive side, but the coaching job was still remarkable.

The Warriors went on a roller coaster ride this season that saw them start 0-2, reel off seven wins in a row following that, get shut out for the first time since 2016 in a 9-0 loss to Hoover to end the regular season and drop the region title, and then reel off four more wins in a row to claim the state championship for a fourth year in a row.

That’s not something you can ignore when it comes to honoring the county’s top coach.

The way the team bounced back from the tough start and the regular-season finale, as well as the growth shown in several facets of the game, was incredible to watch. 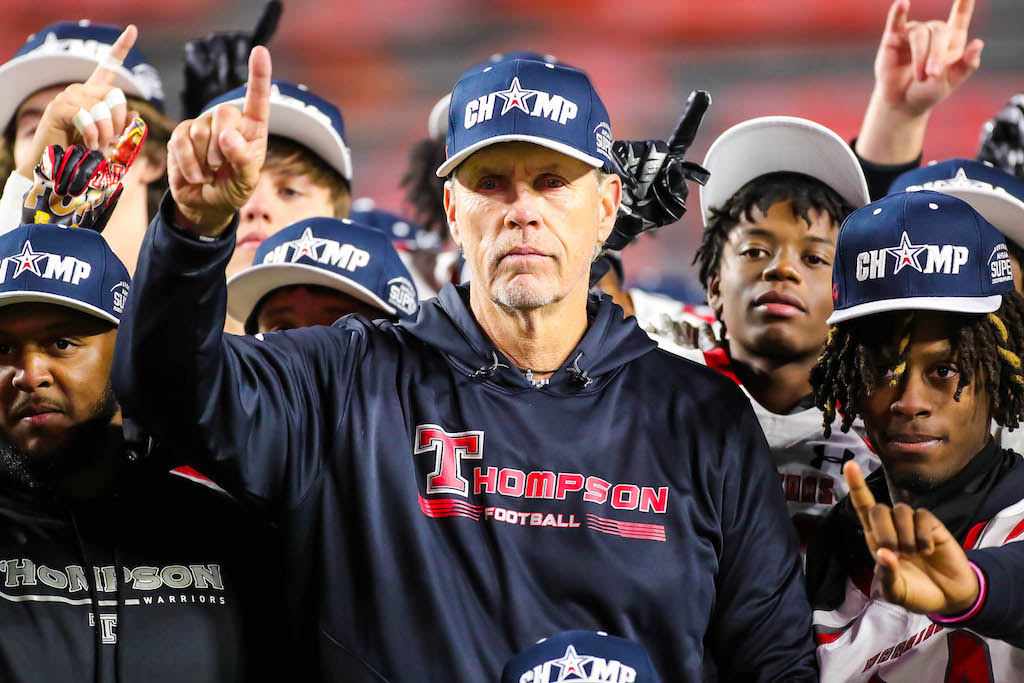 “We had so many kids make life-changing decisions this year that will go with them forever,” Freeman said. “I’m so proud of our players and our coaches and I’m so thankful for God and to know some of the lives we’ve seen changed along the ways. We had to change so much of our philosophy this year from what we’ve done in the past. I’m proud of our coaches because we were able to go in and really do what we tell our kids, which is to get rid of the things that you’re weak out. Sometimes they’re not what you’re supposed to be doing, and then find what you’re good at and do it a lot of the times.”

A lot of those adaptations centered around the rushing attack with the offensive line improving as the season went along and the ground game getting a big-time spark from both AJ Green and Michael Dujon.

Beyond that, however, Freeman turned the offense over to eighth grade quarterback Trent Seaborn for the playoffs with Zach Sims injured. Seaborn went on to lead the Warriors to four straight wins, including a record-setting five-touchdown game in the state championship to earn the game’s MVP award.

Freeman has now led Thompson to four titles in a row, five championship game appearances in a row, a combined record of 83-18 since 2015, 12 or more wins each of the last six seasons and a 21-2 record in the playoffs.

He has now won or shared the Coach of the Year title each of the last six seasons.