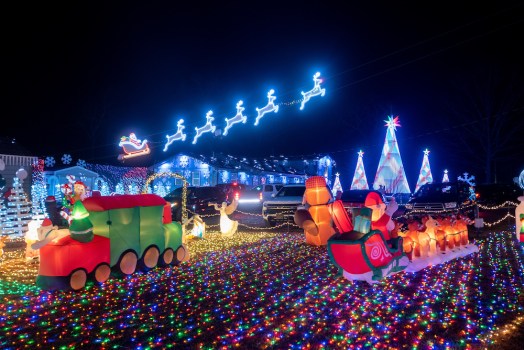 Ricky and Elicia Cloutier’s impressive light display was featured on on Season 10 of ABC’s The Great Christmas Light Fight. (File and For the Reporter/Dawn Harrison) 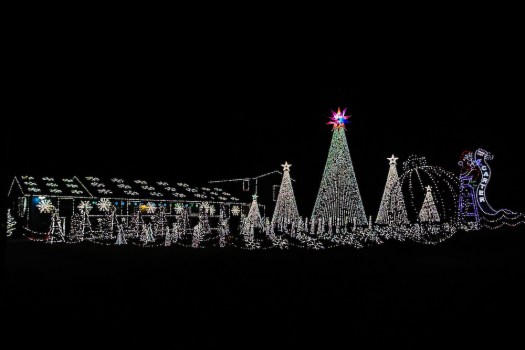 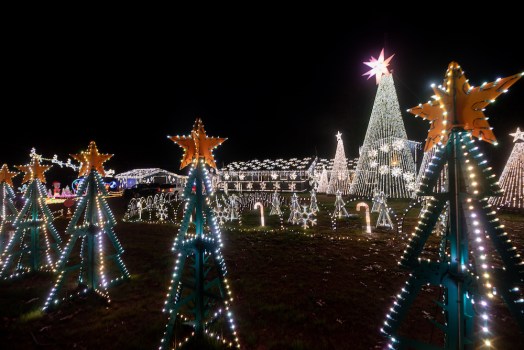 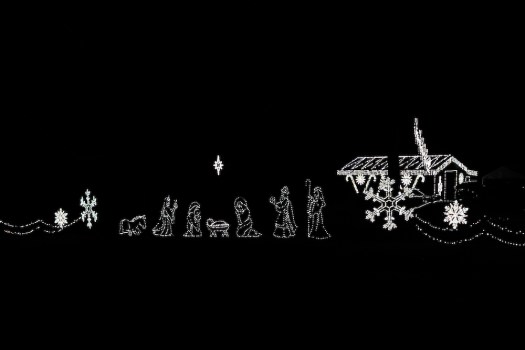 CHELSEA – Chelsea residents Ricky and Elicia Cloutier have a new, long-awaited feature to add to their Christmas light display this year: a large trophy.

The Cloutiers’ impressive display at their home on Shelby County 39 in Chelsea not only earned them a coveted spot on Season 10 of ABC’s The Great Christmas Light Fight, but it dazzled judge Carter Oosterhouse enough to make them the winners of the final episode that aired on Monday, Dec. 12.

Ricky said the opportunity to be featured on the show was a dream come true. Being named a 2022 winner—an honor accompanied by a Christmas light bulb trophy and a $50,000 prize—was an unexpected bonus.

The couple and their children, Zach, Mason and Lashawn, welcome countless visitors to their property each year to see their pixel-packed display, known as the Cloutier Christmas Lights.

From its humble beginnings 12 years ago, the display has grown to include more than 150,000 LED lights and many hand-built props in what the Cloutiers describe as a hybrid of technology and traditional elements.

“We work on it all year,” Ricky said, and added that he and his oldest son operate a side business in which they build Christmas light controllers for displays around the country. “We work with some really cool vendors. We do cool Christmas stuff besides just at our house.”

The Cloutiers also have become friends with other contestants from the show.

“We do pixels, and there’s a whole pixel community,” Ricky said. “It’s a family of light people, and it’s just really cool.”

Since each season of the show has to be filmed a year in advance of when it airs, the Cloutiers have known for a while that they won their episode, the final episode of Season 10; however, they did not know anything about the other families they were competing against until they watched the episode Dec. 12.

“We knew we won a year ago with the process, but we weren’t allowed to tell anybody,” Ricky said. “It’s pretty cool, though.”

According to Ricky, the family had been vying for a chance to be on the show for about five years.

Once they were selected as contestants, the filming process began for much of what was shown in the episode, including the grand light reveal with Oosterhouse, the judge for half of the season’s episodes (Taniya Nayak is the other judge).

Oosterhouse returned to the Cloutiers’ home a couple of weeks later to film the surprise announcement that they had won.

“It was an unbelievable experience,” Ricky said, and added that the show’s production crew was “phenomenal to work with.”

The Cloutiers scaled down their display this year to help with traffic congestion and ensure visitors’ safety.

“This got way bigger than we ever thought, and we thank you all and we love you all,” Ricky said in a video posted to the Cloutier Christmas Lights Facebook page in early December. “We just didn’t feel that that was a good plan for this year, especially once we air and everyone in the whole country, city and state sees us.”

The display is on from 5-10 p.m. each night, and the features, including the nativity scene, are all facing the road to give visitors a good view of everything as they drive by it.

Ricky said moving the display somewhere with more space in the future is something the family is considering, but for now, they are basking in the glow of victory—and their treasured trophy.

Watch full episodes of The Great Christmas Light Fight on abc.com or stream on Hulu.

The Cloutier Christmas Lights are located at 5703 Shelby County 39 in Chelsea.

For updates on the display, visit The Cloutier Christmas Lights Facebook page.