Sports Column: Friday night lights have been turned off 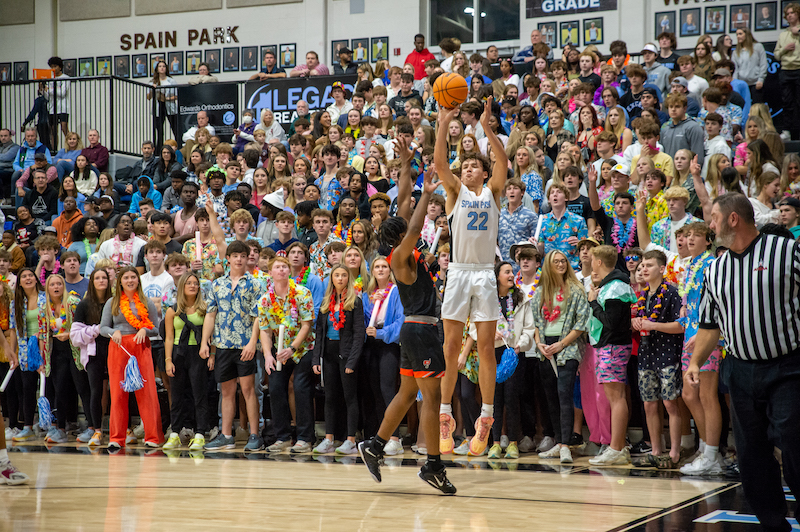 It is time for fans to move from the football stands to the courtside bleachers. (For the reporter/Larry Dancy)

Football season officially ended in the Shelby County area when the Thompson Warriors returned home with their latest 7A Football State Championship trophy. As bitter-sweet as it might be, my favorite time of year has now fallen upon us, basketball season is here.

There is something so special about basketball that makes it different compared to other sports. A lot of the reason why I am in the position that I am in is because of basketball. Being the daughter of a high school teacher, I spent a lot on the sidelines of football games, and in the stands of hockey matches, but my first and favorite memory is sitting courtside at a basketball game.

Smelling popcorn at every game I go to in Shelby County brings me back to those days of being so young and watching high schoolers play. Those are some of my favorite memories of being a kid in the suburb of Detroit. Watching players pour their hearts out in the game, the older teacher handing me popcorn as I am captivated by the cut-throat rivalry game. I was just five years old watching a game that I loved, who would have thought 17 years later I’d be watching games for my job?

Basketball is raw and emotional, just like any sport. However, unlike football which is coated in padding and shielded by the required protection needed for the sport, in basketball you can visually see the emotion. The gym was electrified as Chelsea’s Paul Lanzi passed the threshold of the 1000th point knocked down in his high school career. The turnaround Pelham’s boys’ basketball team made in the second half of the game led to their victory against Homewood. Oak Mountain defeated Northridge in the fleeting seconds of the final quarter. Or one of my personal favorites, the excitement Chelsea’s girls had when they defeated reigning champs Mountain Brook in the annual Mountain Brook Turkey Jam Tournament.

Saying that Alabama is a football state is completely accurate, but I think it is time that basketball be recognized too. Collegiate programs such as Auburn University and the University of Alabama have appeared and won a couple of SEC Championships in the past five years. There are so many talented players within the Shelby County community and it shows how passionate they are about their team and the games by how far they go in the season.

I thought about that five-year-old kid watching basketball in the suburbs of Detroit a lot lately. So much has changed since 2005. I graduated from the high school I spent 13 years watching games with. The old teacher who used to give me his popcorn just passed not too long before the latest season started, and many of those incredible athletes I used to watch have since retired from their professional careers in the NBA. But there is one thing that hasn’t changed and never will, and that is the love I have for the game.