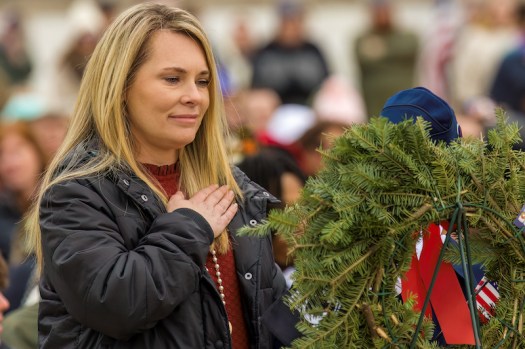 The 14th Wreaths Across America ceremony was held Saturday, Dec. 17 at the Alabama National Cemetery to honor the lives lost of veterans and thank those who are in currently in service as active duty. (For the reporter/Jason Homan) 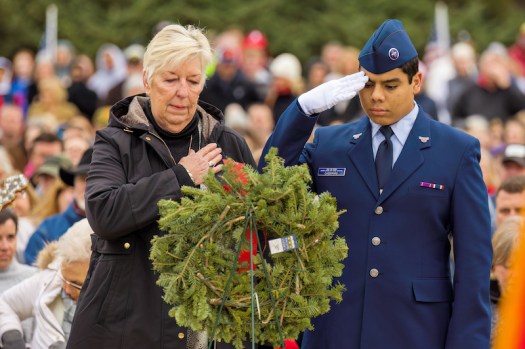 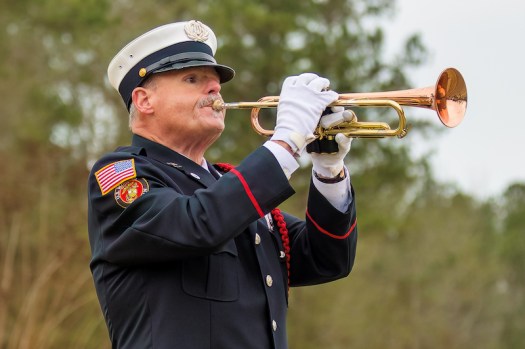 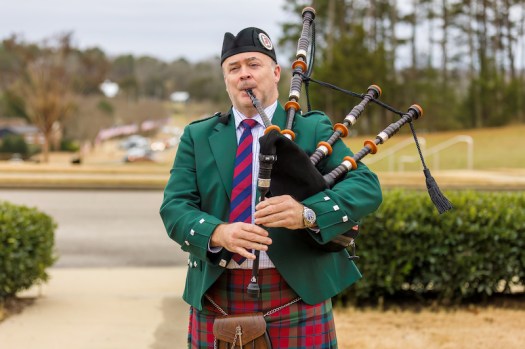 MONTEVALLO – The lives of fallen veterans were honored on Saturday, Dec. 17 at the 14th Wreaths Across America Ceremony held at the Alabama National Cemetery.

Fox 6 News Anchor Janice Rogers was the emcee for the event and led those in attendance in a moment of silence to remember the lives lost.

“At this time join me for a moment of silence to remember the fallen and the over 10,000 veterans and their family’s members who are interred here in the Alabama National Cemetery, the prisoners of war, the mission in action and to honor those who have served and are serving this great nation’s armed services,” Rogers said.

Rev. Tom McMahon, pastor and U.S. Navy Vietnam veteran, led an invocation prayer for those in attendance and to honor those fallen.

“Today, many of you here are veterans of wars and conflicts that America has had to fight to protect the innocent and oppressed,” Rogers said. “You have answered that call and served your country well. To all of you we say, ‘Thank you,’ and we are honored by your presence.”

Troop 533, based at Oak Mountain Presbyterian Church was in attendance to honor Second Lt. Gunner Shultz who was 22 years old when he was laid to rest in the Alabama National Cemetery grounds. Shultz’s parents were present at the ceremony to witness the commencement.

“God bless you for your sacrifice,” Rogers said. “We will not forget your son Gunnar.”

Gunnar was beloved member of Troop 533.

“America has always been the first nation to stand up for the freedom of people around the world,” Rogers said. “And to the many men and woman serving today in all branches of the military around the globe, we honor them and their families for the sacrifices they make each day to keep our country safe from terrorism, hatred and injustice.”

The POW/MIA wreath was laid by Aimee King, granddaughter of Private First-Class Harold Dean Patton. Patton was a U.S. Army veteran of World War II. The wreath serves as a reminder for those who never returned home as prisoner of war or missing in action.

Lovata Woods laid a holiday wreath in memory and honor of all who served and are serving in the United States Air Force.

Chief Master Sergeant Esther A. Sanford laid a wreath in honor of those who are serving in the United States Space Force.

Tangerie Underwood laid a wreath in memory and honor of all who served or are serving in the United States Coast Guard.

Lois and David Sedberry laid down a wreath in honor of those who have served or are serving in the United States Coast Guard.

The Taps was played by Jim Quakenbush, US Marine veteran and member of Bugles across America.

“The wreaths before you represent our commitment as a United States to remember the fallen,” Rogers said. “We also want these holiday wreaths to symbolize our honor to those who have served and are serving in the armed forces of our great nation and to their families who endure sacrifices every day on our behalf. To our children, we want you to understand that the freedoms you enjoy today have not been free, but have come with a cost that someday, you may have to pay yourself. As a nation standing together, we can defeat terrorism, hatred and injustice. Thanks to our veterans, we have the freedom to do just that.”