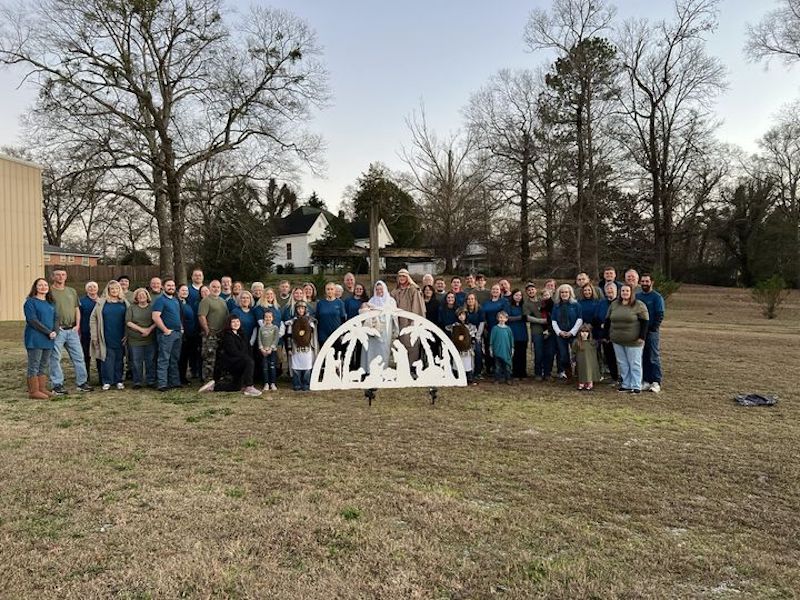 Wilton Bible Baptist Church hosted its first live nativity event since 2017, the event has remained a tradition since its emergence in 2007, however, Friday Dec. 16 was the official revival of the nativity event. (Contributed)

“We are praising the Lord for the turnout that we had come and enjoy this hands-on experience of a Night in Bethlehem that had very little advertisement,” Night in Bethlehem Director and Member Laurel Burns said. “This was a two-night event, and both nights we saw many families and church groups and hit record numbers.”

Burns said these events are ways of reaching out to others during the holiday season and sharing the gospel.

“This event is a without a doubt the biggest outreach we do each year,” Burns said. “We decided to tell the story of what that night might have been like in Bethlehem some 2,000 years ago.  The evening starts with registration, souvenir photo, a chance to write your prayers down and place on our tree for us to pray over.  Then the outside adventure begins with a visit to King Herod’s palace, a stop at the census taker for registration, shopping in the marketplace with coins we provide for them to shop with where they could purchase fresh baked bread, fruit, dolls, scarf, pottery, jewelry, next the tax collector as everyone must pay their taxes right?”

Burns said that the nativity event first occurred in 2007 and was an annual event since then, but years 2012-2016 were skipped. The nativity was almost revived in 2017, but a snowfall halted it after the first night.

“This is the first time since the 2017 year that we have done it,” Burns said.  “All our people were on board with trying again, and we felt the Lord was all in this production. We spent many months in prayer and preparation and could not be happier with the results.  This year we had 56 Wilton people in costumes and behind the scenes and the excitement was contagious.  The community showed up and everyone enjoyed their journey.”

Burns said it takes everyone in the community to make a project like Night in Bethlehem work, and that although Wilton Baptist Church is a small Southern Baptist church, it is a mighty voice for the Lord.

“This is a tradition that most people look forward to,” Burns said. “We have visitors that have made this an annual tradition and were so glad that we brought it back. The overwhelming response with very little advertising shows that this world is still searching for the true meaning of Christmas. We believe that the Lord used Wilton Baptist to portray just that with the telling of the story, the step back in time by transforming our field into Bethlehem, a little laughter, a few tears for the preciousness of the night and a lot of hard work and most importantly everything pointing all glory to the Lord.”