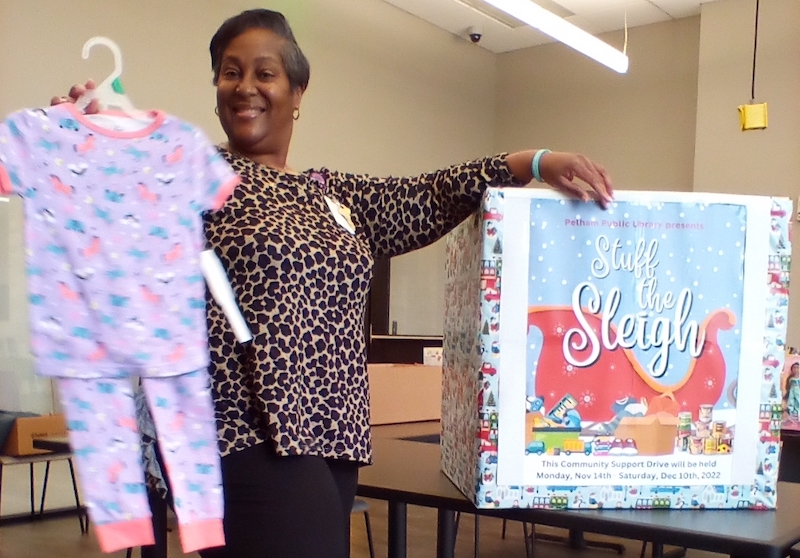 The Pelham Public Library held a drive to collect food, toys, clothes and baby items to give out in the Stuff the Sleigh drive, for those in need during the holidays. (Contributed)

PELHAM – The Pelham Public Library was full of the holiday spirit as it hosted its annual Stuff the Sleigh drive on Friday, Dec. 16.

“For me, giving and volunteering are extensions of service,” Librarian Donna Robinson said. “In one of the monthly staff meetings, I pitched the idea of a ‘toy drive’ and my co-workers were more than willing to support the idea as well as give. I am truly grateful for my Pelham Public Library family.”

Robinson said she is aware the holiday season impacts some more than others and offered the quote by Damnian Barr, “We may all be in the same storm, we are not all in the same boat.”

“The fact that the Pelham community donated and supported the needs of the community makes it a success,” Robinson said. “We collected items from Nov. 14-Dec. 10. I am very pleased and look forward to the 2023 project and planning.”

The theme for 2021 was “8 Reindeer and a Sleigh” and was the first time the Pelham Public Library collected items for the needs of the community.

“Last December revealed a slowdown in the pandemic, but also revealed that the demand for food, toys and clothes was still great,” Robinson said. “The project flourished, and I believe we made an impact through our collecting and giving.”

Robinson said she would like to thank the Pelham community, namely the Pelham Public Library patrons, for the outpouring of donated items as well as cash donations.

“They willingly contributed their treasure and time,” Robinson said. “Their kindness will always be remembered and ‘Stuff the Sleigh 2022’ was huge success.”