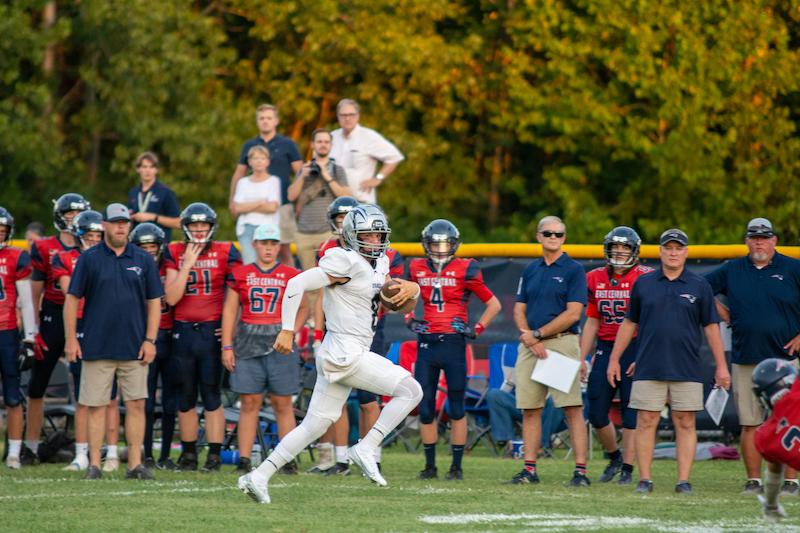 Evangel quarterback Eli Whitfield helped lead an offense that scored more than 40 points in every game this season en route to another state and national championship. (For the Reporter/Markee Canada)

It was a special season for local 8-man football teams, as the Evangel Lightning won a fifth consecutive National Championship as well as an ACSC State Championship, while the Cornerstone Chargers put together a 6-5 season that featured a playoff win in their first year playing 8-man football.

The Lightning finished a perfect 13-0 this season, scoring 41 or more points and giving up 28 or less in every game en route to both championship wins. After taking down Lighthouse 55-15 in the ACSC title game, they went on to beat the Tennessee Heat 49-0 in the national semifinals before beating Freedom 55-26 in the national title game.

The Chargers saw one of their most successful seasons in recent history as well. After a 3-0 start to the season, Cornerstone eventually improved to 5-2 through the first seven games and went into the postseason at 5-4. The Chargers then downed North River Christian 72-51 in the first round for a playoff win, earning redemption from a 52-48 loss earlier in the season. They fell one week later to Springwood to come up one win shy of the AISA 8-man state championship game.

Now, it’s time to reflect on those special runs by celebrating the elite talent on this year’s 8-man All-County football team.

Quarterback: Eli Whitfield, senior, Evangel. The senior quarterback threw for 1,521 yards and 29 touchdowns on 81-123 passing to lead the Lightning to another national title. He threw for 101 touchdowns in his time at Evangel.

Running back: Hunter Atkins, junior, Evangel. Not only did Atkins total 1,207 yards on 98 carries, but he finished with 28 touchdowns, while he added 21 catches for 271 yards and five touchdowns.

Receiver: Judah Thompson, senior, Evangel. The second-leading receiver among 8-man teams in the county, Thompson finished the year with 629 yards and 16 touchdowns on 28 receptions. He also added one rushing touchdown and 77 yards on the ground.

Receiver: Kyle Jones, senior, Evangel. A strong blocker as a tight end, Jones was also sure-handed in the passing game. On just 12 receptions, he was able to total 312 yards and five touchdowns this season.

Receiver: Noah Schober, sophomore, Cornerstone. Just shy of 1,000 yards, Schober finished his sophomore season with 975 receiving yards and 13 touchdowns on 29 receptions, making him the county’s leading receiver. He also finished second on the team with 70 tackles.

Offensive line: Jackson Tuell, senior, Evangel. A starting right guard for three years, Tuell was the leader up front for an offense that totaled more than 40 points in every game.

Offensive line: Ethan Stallings, sophomore, Evangel. Stallings has been starting on the offensive line at left guard for two years and was as trustworthy as anyone this season despite his age.

Offensive line: Malachi Adams, eighth grade, Cornerstone. A young and promising lineman, Adams finished this season as a leader on both sides of the ball. Not only was he strong on the offensive line, but he totaled 40 tackles on defense, including six for loss and two sacks. 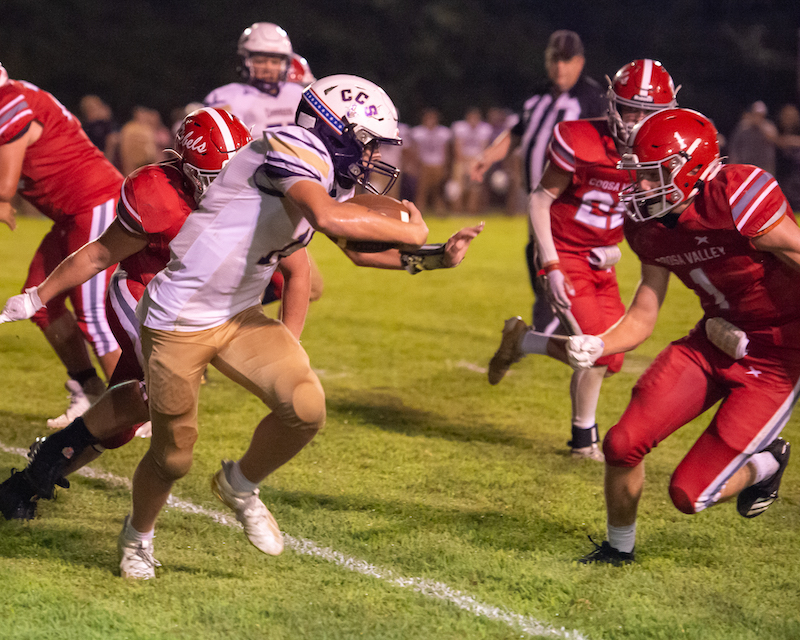 Zeke Adams totaled more than 3,000 yards of offense and 39 touchdowns for the Cornerstone Chargers during his sophomore season. (For the Reporter/Larry Dancy)

Athlete: Zeke Adams, sophomore, Cornerstone. Just a sophomore, Adams was one of the most athletic playmakers in Shelby County this year. The quarterback and safety for Cornerstone finished with 1,334 rushing yards and 15 touchdowns on the ground, while totaling 1,738 passing yards and 24 touchdowns through the air. That gave him a total of 39 touchdowns and more than 3,000 yards of offense. He also finished as the leading tackler for the Chargers with 80, including five for loss, and led the team with six interceptions.

Kicker: Lucas Mast, senior, Evangel. Mast finished his final season with the Lightning as a consistent kicker. He made 66 of his 71 extra point attempts and was 1-1 outside of that with a 32-yard field goal.

Defensive line: Landon Alexander, sophomore, Cornerstone. The third-leading tackler for the Chargers behind Adams and Schober, Alexander totaled more than 50 tackles, including a team-high nine for loss and five sacks.

Defensive line: Grady Watkins, junior, Evangel. The second-leading tackler for Evangel this season, Watkins finished with 71 total tackles, including 13 for a loss and eight sacks.

Defensive line: Cole Romano, junior, Evangel. Cole Romano had a nose for the football this season and totaled 34 assisted tackles with 12 solo tackles, while he finished with a total of 14 tackles for loss and 6.5 sacks.

Defensive line: Clay Stanton, junior, Evangel. A nose guard for the Lightning, Stanton finished with 45 tackles and finished in double digits in tackles for loss, while he added seven sacks.

Linebacker: Kaden Jones, senior, Evangel. The Lightning’s leading tackler, Jones totaled more than 100 tackles with 104 this season. He also led the team with 16 tackles for loss and finished with 3.5 sacks.

Linebacker: Hayden Black, junior, Evangel. Another player with double-digit tackles for loss, Black finished with 12 TFLs and added two sacks with a total of 54 tackles this season.

Linebacker: James Wilson, sophomore, Cornerstone. Wilson finished his sophomore season with 50 tackles, including five for a loss, while he added two interceptions.

Secondary: Zion Thompson, junior, Evangel. A leader in the secondary, Thompson finished with the leading number of interceptions among 8-man teams this season with eight. He finished with 17 total tackles as well.

Secondary: Jackson Waugh, junior, Cornerstone. A playmaker on both sides of the ball, Waugh finished second on Cornerstone’s team with three interceptions, while he totaled 20 tackles. He also added 237 receiving yards and four touchdowns on eight receptions offensively.