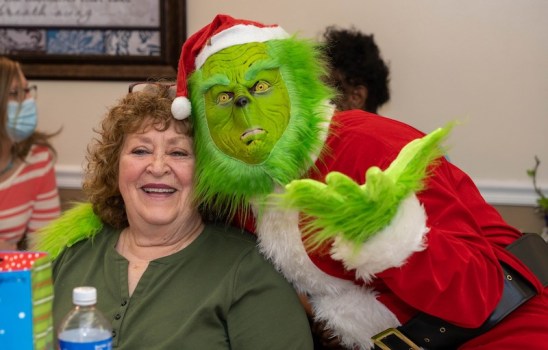 St. Pierre dressed as the Grinch and provided residents with hugs and an opportunity for selfies. (Contributed) 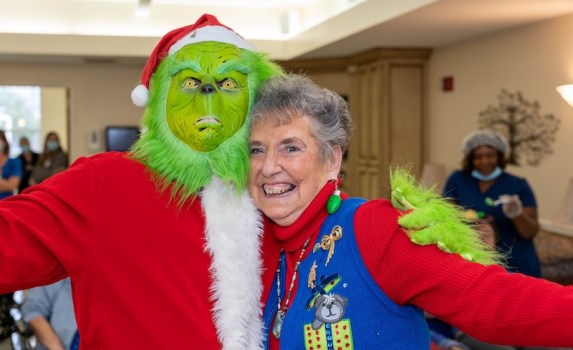 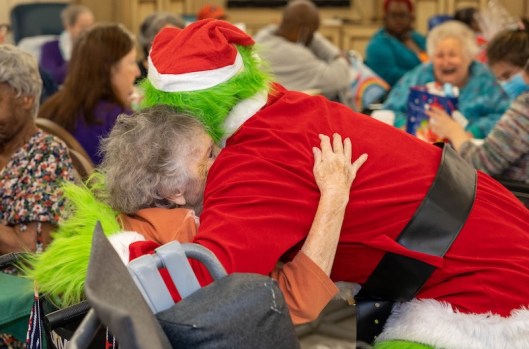 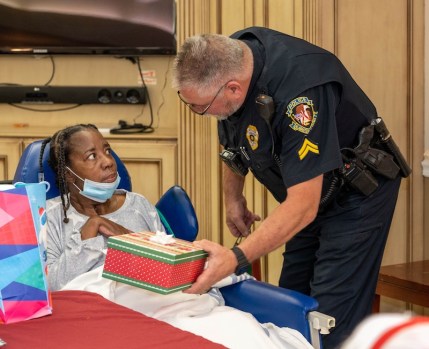 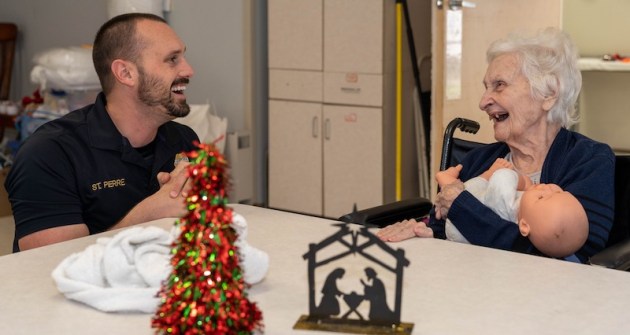 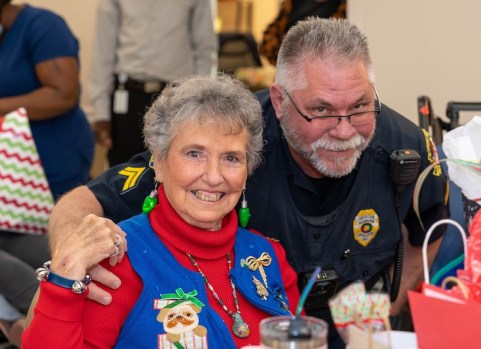 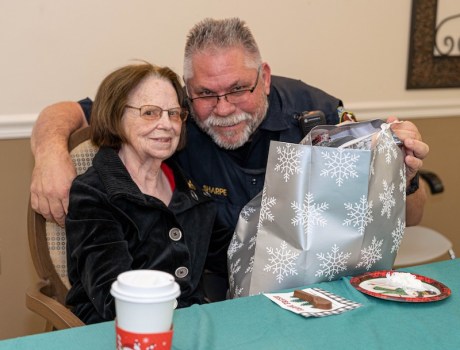 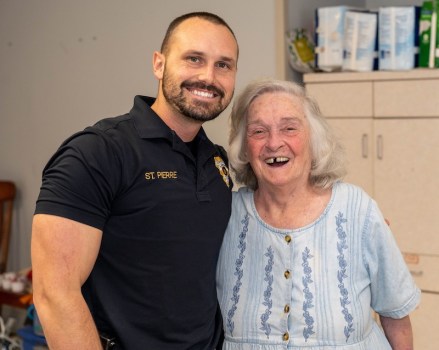 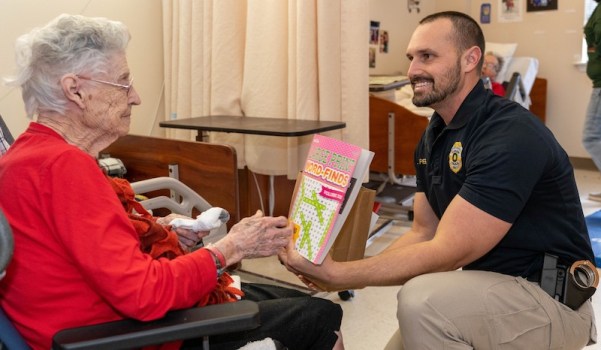 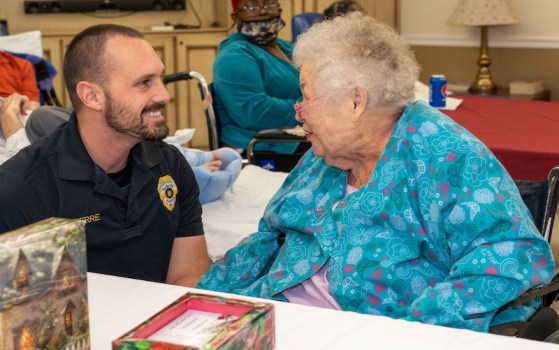 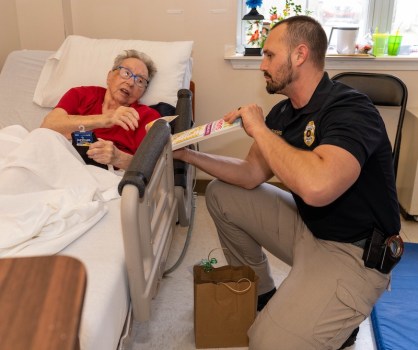 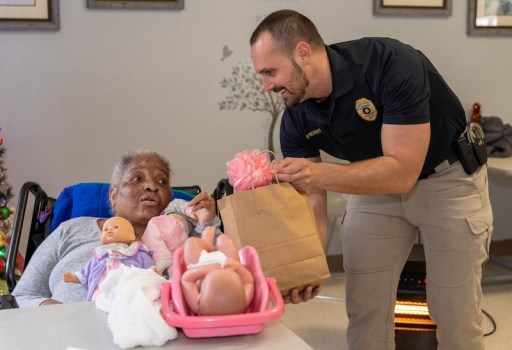 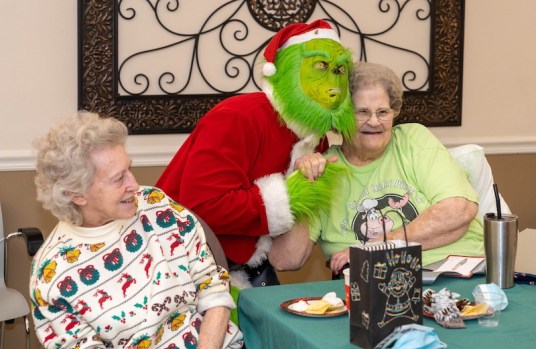 ALABASTER – A jolly Grinch makes his grand entrance at Rehab Select at Shelby Ridge, but it isn’t just any man in the suit, it’s one of the Alabaster Police Department’s very own.

St. Pierre also dressed as the Grinch and provided residents with hugs and an opportunity for selfies.

“(The) event was excellent, and we always look forward to serving our seniors at Shelby Ridge every Christmas season,” Cpl. John St. Pierre said. “This was our first year back inside with the residents due to COVID restrictions in years past. However, despite the restrictions, we’ve secured enough donations so that every resident has received a Christmas gift for the last six years. It felt great to join them this year and see the happiness on their faces as they opened their gifts.”

This year’s visit to Shelby Ridge was well-received by the residents.

“The response was excellent,” St. Pierre said. “Cpl. Sharpe and I thoroughly enjoyed distributing the gifts, interacting and taking pictures with the residents. Everyone was smiling and laughing, especially when the Grinch made his grand entrance. There were a lot of hugs and selfies taken with the Grinch. It was so much fun playing that character and bringing joy to the residents through laughter.”

The annual gift giving started back in 2016.

“My supervisor, Lieutenant Susan Peavy, and I were meeting the admin team at Shelby Ridge in 2016 to check in and see if they needed anything before Christmas,” St. Pierre said. “She and I both noticed a Christmas tree in the lobby containing numbered ornaments and a wish list. We asked about the tree, and the admin team told us they use it hoping that visiting guests would consider adopting a number for a resident to receive a Christmas gift.”

However, most residents sadly did not receive a Christmas gift in the past, he said.

“Therefore, during that same visit, Lieutenant Peavy and I took every number on that tree and sought donations for each resident,” St. Pierre said. “By Christmas 2016, and currently, we’ve secured enough donations for every resident to receive a gift and for any new resident that comes in over the holidays.”

St. Pierre expressed his thanks to those that make the special event happen every year.

“I want to thank everyone that donated to this special event this year and every year,” he said. “The donations come from our APD officers, APD administration team, AFD Firefighters, Alabaster city employees and our community. I am grateful for the opportunity to serve these residents and look forward to next year.”