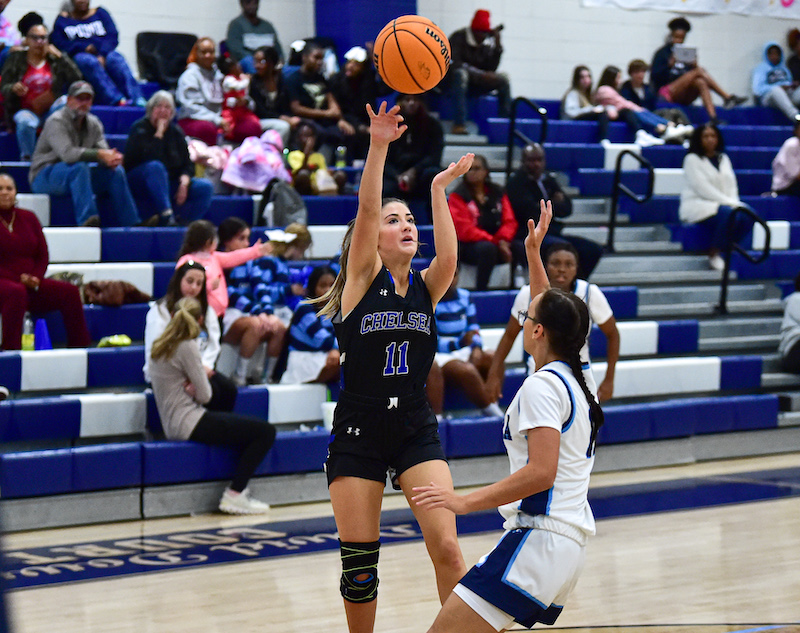 PELL CITY – Chelsea’s girls’ basketball team knocked down a couple of more wins at the Pell City Chick-Fil-A Christmas Classic before ringing in the New Year.

The Chelsea Hornets started the tournament off with a 63-37 victory against Jacksonville. Haley Trotter led the Hornets with 25 points and 10 rebounds. Sophia Brown followed Trotter with 13 points of her own.

In the semi-final round, Chelsea went up against the Pelham Panthers. Brown led Chelsea after picking up 25 points. Trotter followed Brown with 12 points and 12 rebounds. The Panthers fell to the Hornets 66-55 and Chelsea advanced to the championship round against Pell City,

The Hornets maintained a three-point lead over Pell City before the first half concluded. Pryor made the front end of a one-and-one and knocked down a two-pointer. Madison Moore and Brown totaled a combined four points.

Returning from the break, Chelsea trailed behind Pell City 30-29 before the final quarter started. After a defensive battle in the fourth quarter, the Hornets fell to Pell City 40-38. Chelsea finished the Pell City Chick-Fil-A Christmas Classic second overall.

Trotter led the Hornets in the second half with five field goals made inside the arc and two baskets knocked down from the free-throw line. Brown followed Trotter after totaling four points from four free throws.

Moore knocked down the last basket outside of the arc for the Hornets in the championship round. Hardy Erwin, Pryor and Schwallie totaled a combined six points.

Chelsea hits the road to Hewitt-Trussville on Friday, Jan. 6.